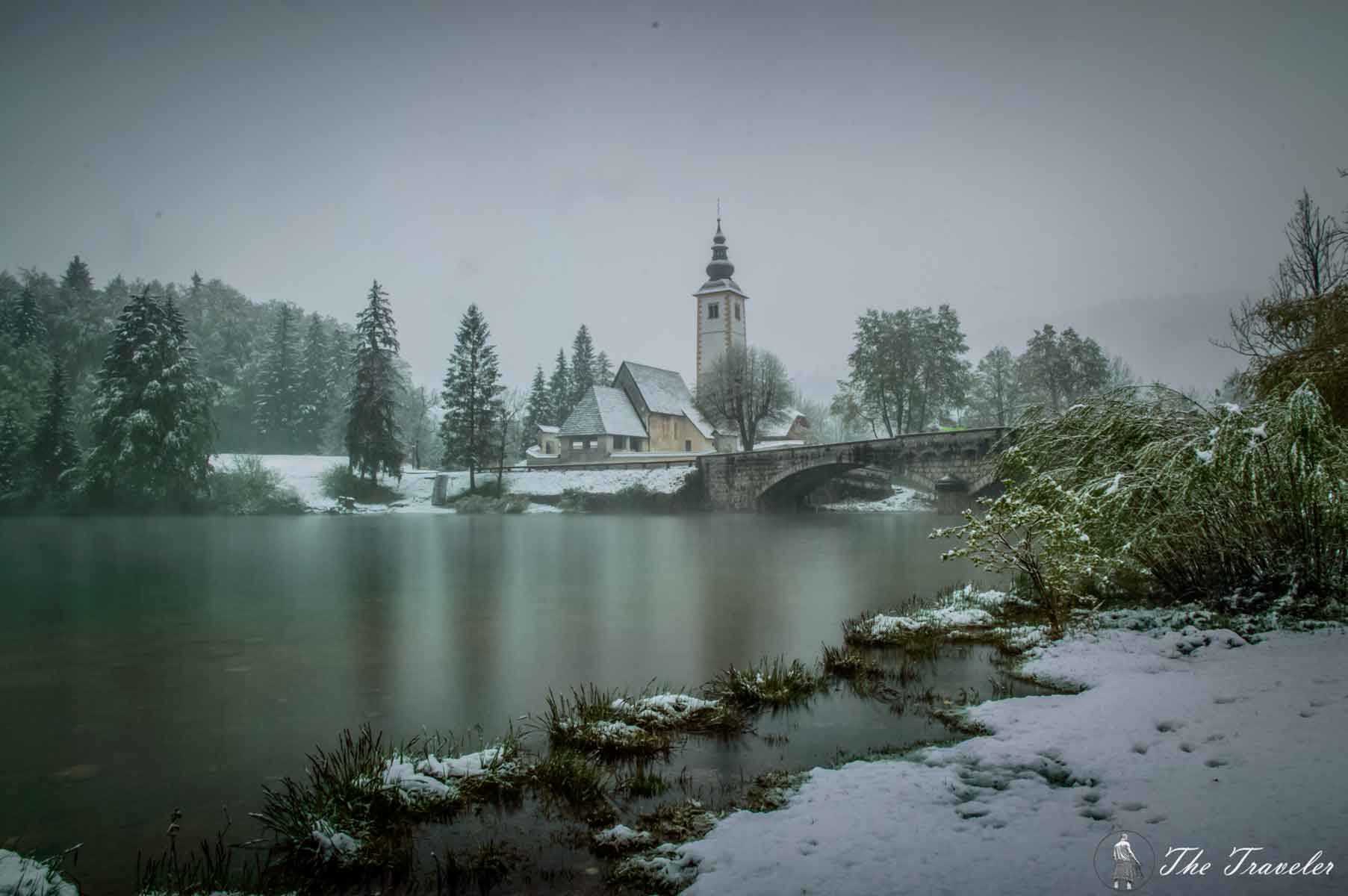 It’s normal that the main flow of tourists in this area of Slovenia is directed to Bled. But there is another beautiful lake that remains slightly in the shadow of its famous neighbor. This is Lake Bohinj! Less familiar, but no less beautiful! And nearby is the popular Savica waterfall.

Located in the Julian Alps, two thirds of the Bohinj Valley falls into the Triglav National Park, and includes Lake Bohinj. The distance to Bled is only 30 km, which takes 30 minutes by car. Despite the traveling tourist buses between the two places, this remains the best and fastest way to visit them.

Exploring the area around Bled and captivated by the thought of beautiful mountain landscapes, we could not help but spend a few hours on Lake Bohinj. It’s an inspiration for nature lovers and worth a look… even for a while. Traveling at the end of April, we imagined a spring walk among endless pastures, surrounded by high peaks and saturated with lots of greenery and flowers. This is exactly what we received the day before in Zirovnica and around Lake Kreda, but not today… Time had its own plan and it was not very kind to us. We were surprised by the heavy snowfall and decided to head to the famous Savica waterfall in the western part of the lake.

We arrived by car to the spacious parking lot around Savica hut, from where we go to the waterfall. The snow was getting more intensified… We definitely didn’t expect such weather, but we had taken raincoats anyway and quickly equipped ourselves with them. Usually you pay both parking (4 euro for 3 hours) and a fee for the hike to the waterfall (3 euro). In our case, both were free, but there was a sign at the entrance to the trail that tourists go at their own risk. Okay… we take it!

The distance is covered for for about 20 minutes of normal walking. With some other rest and increased attention, due to the slippery surface, it took us about 25 minutes in the direction. The route is easy and pleasant, resembling a walk in the park. There are well-defined steps that lead right to the waterfall. To our advantage, we walked under thick trees almost all the time, and they stopped the falling snow to some extent. The route is accompanied by several places with beautiful panoramic views of its valley… or the mystical fog and snowy slopes.

Slovenian waterfalls are the most flooded and impressive in the spring. And Savica is among the most beautiful and visited in the country! Its waters were falling so hard that it was difficult for me to even approach the fence, which is a considerable distance from him… And the rumble of his waters was deafening! It is 78 meters high and is part of the Sava Bohinjka river, which flows into the lake. There is a wooden pavilion, which gave us the opportunity to shake off wet clothes and enjoy for a while his majesty. 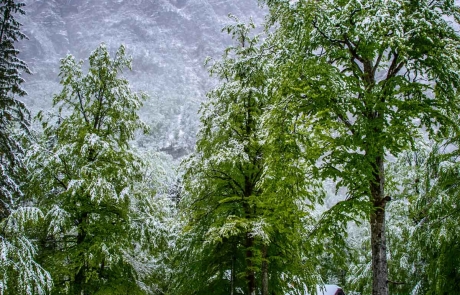 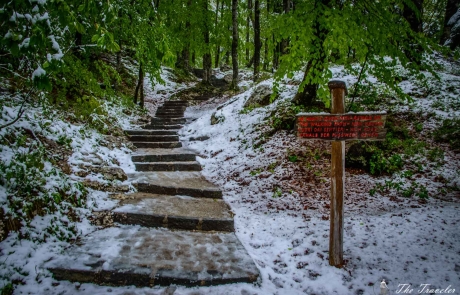 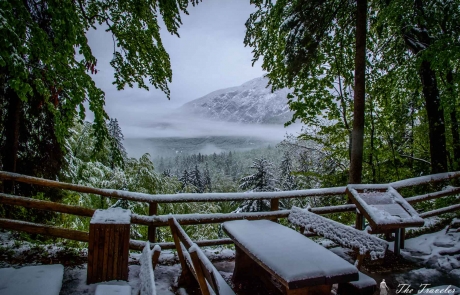 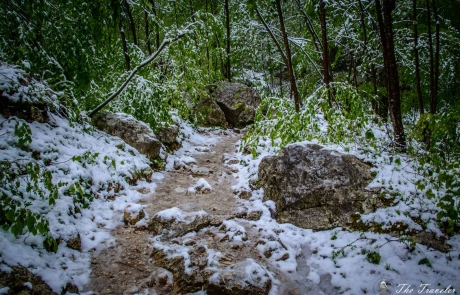 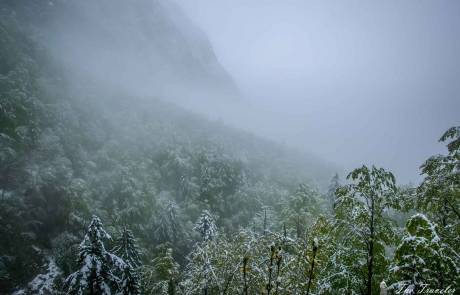 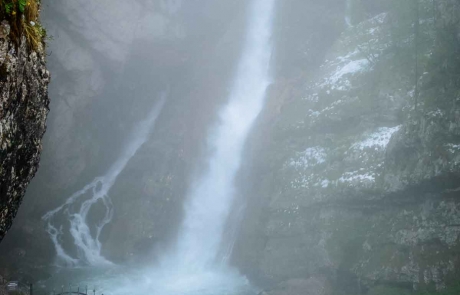 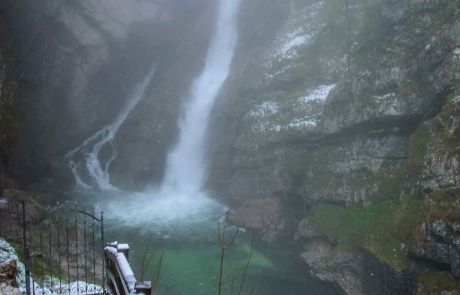 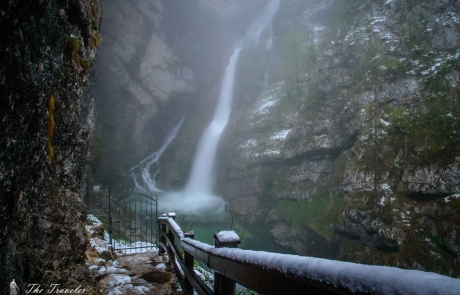 There are several parking lots along the lake where you can stop, and our goal was its southeastern shore. This is the most visited part. At such times it isn’t difficult to find a parking space… We left the car right HERE.

Here we are next to the glacial lake, which is the largest permanent lake in Slovenia! A tourist alley with a total length of around 12 km has been built along its entire perimeter. As much as we wanted, time didn’t allow us to walk on her… We will be satisfied with a short walk around Ribčev Laz. We passed the pier, where there were several lonely boats, complementing the mystical landscape enough. We continued to Goldenhorn/Zlatorog – the statue of the famous chamois with a golden horn. Yeah… the mirror landscapes of the high green mountains around the lake and its crystal clear turquoise waters are missing, but in just a few hours of snowfall, it has become a unique snow tale…

💡 The lake is suitable for visiting in any season! In winter, tourists are attracted by the nearby ski resort, in summer its waters are perfect for swimming, and in spring and autumn it is suitable for hiking in the area. 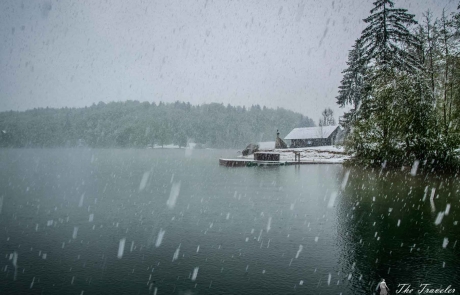 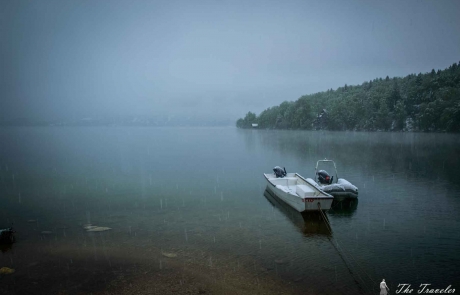 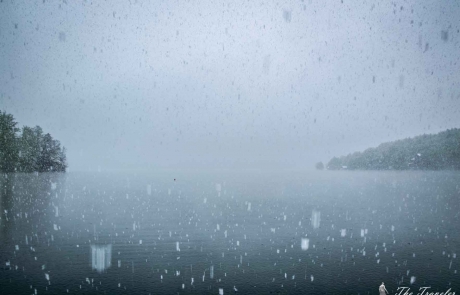 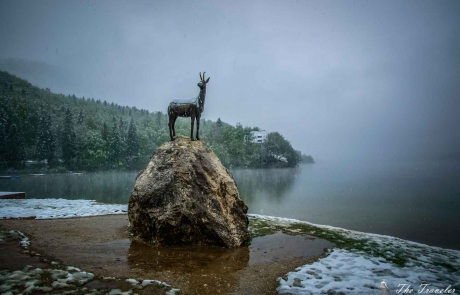 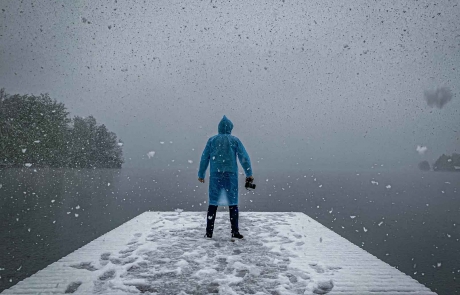 The view to the Church

And the most emblematic view is to the old stone bridge leading to the church of St. Joan (Cerkev Sv. Janeza Krstnika). I quickly jumped over the guardrail and found a spot near the shore where I could take a few shots of the temple. There was no one around … Almost freezing silence, broken only by the noise of the snow rags and their contact with the still waters of the lake… 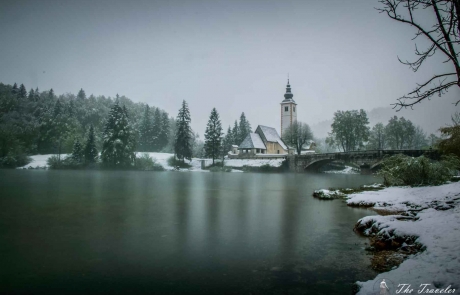 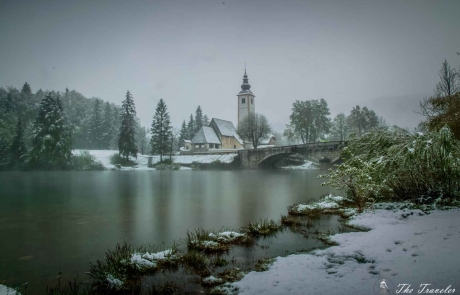 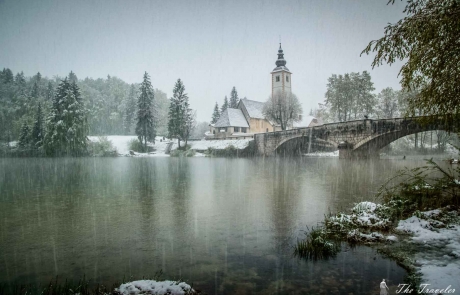 After so much wading in the snow, we wanted to take off our wet outerwear and dry our feet warm… And to eat something tasty, of course. We had chosen Foksner. The place is famous for its variety of beers and great meat, which is prepared on the outdoor barbecue. We were attracted by the burgers… Hell delicious and juicy! The prices are also very good for this tourist area of Slovenia. So we warmed up and ate that we definitely didn’t want to leave here… 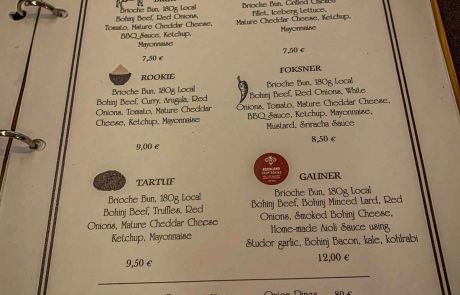 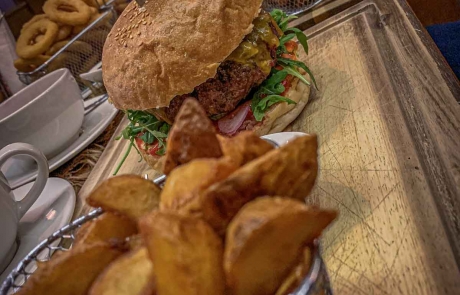 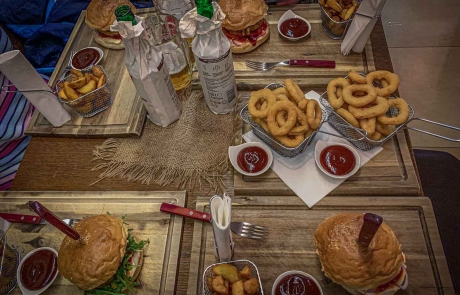 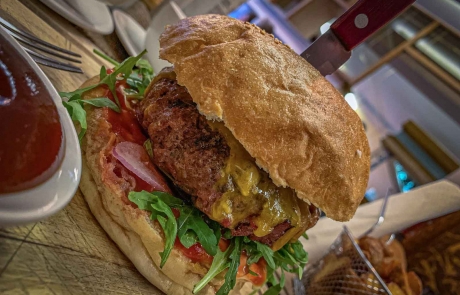 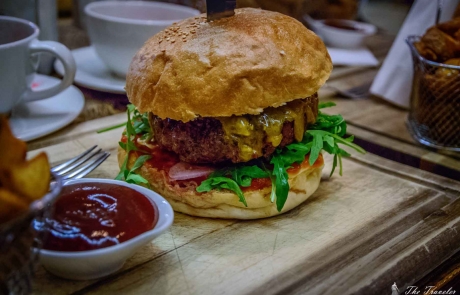 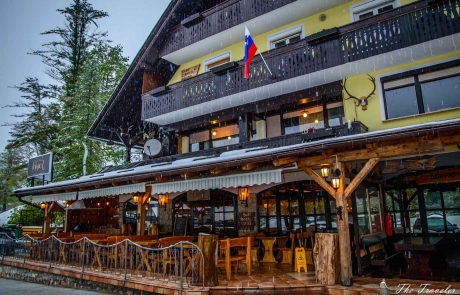 What we failed to see

I had certainly planned more time around Lake Bohinj and a few additional places I wanted to visit, but the weather conditions didn’t to allow us… If you have more time, you can visit the gorge Mostnice, reach the bench with a view of the lake ( Vogar Viewpoint – Lake Bohinj ), climb over Stara Fužina to the unfolding view from the hill ( HERE ), jump to Koprivnik v Bohinju and the dizzying panorama over the entire Bohinj Valley ( HERE ) or just enjoy a leisurely stroll along the northern shore of the lake and its beautiful scenery…