At the home of the best beer in the world – Guinness 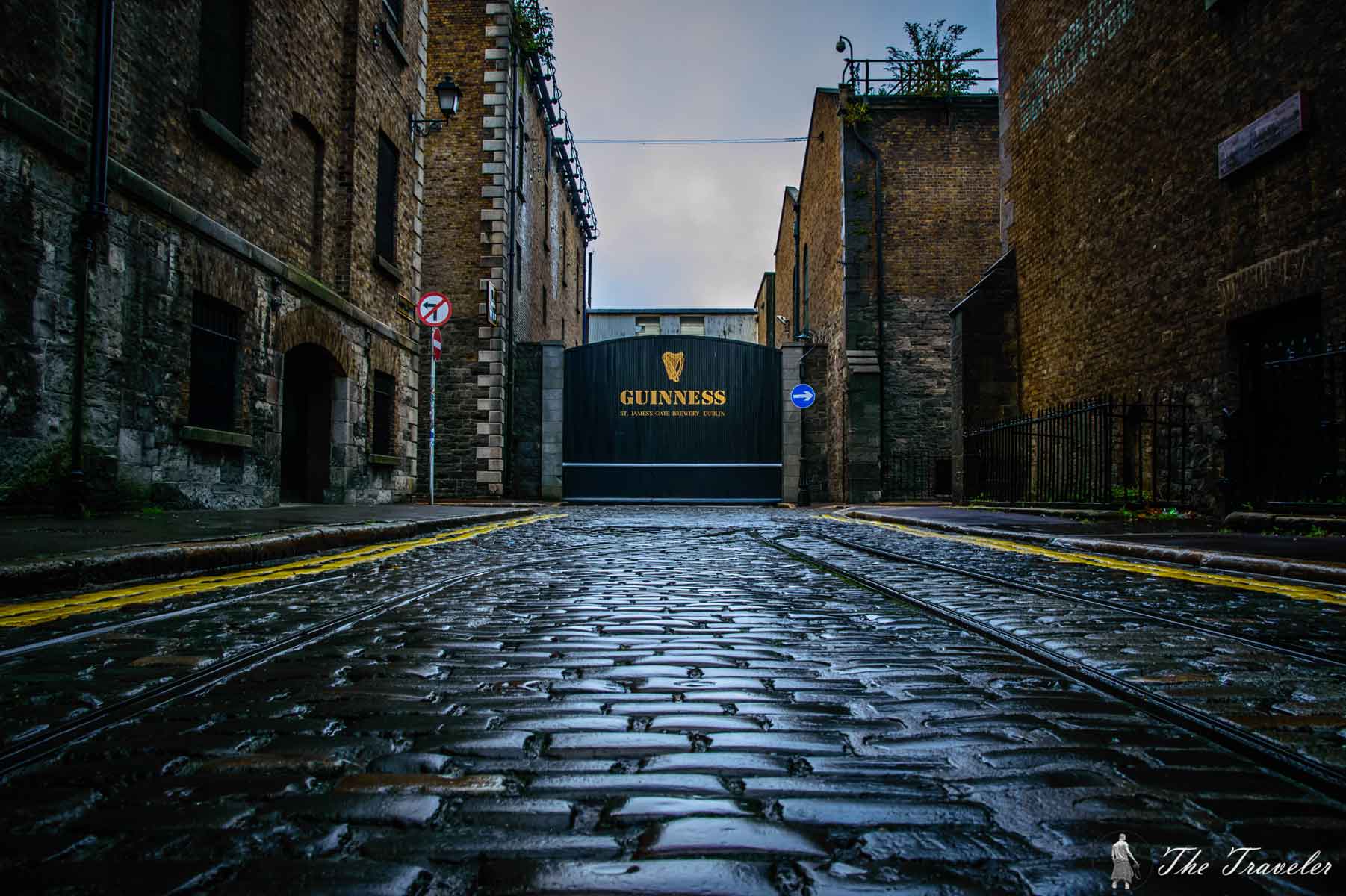 Dublin… Guinness! That’s right, there is no more best association for the city than the world-famous dark beer. There is hardly a person from Dublin who doesn’t think that this is the best beer in the world. The Guinness Storehouse is the most visited tourist attraction in Ireland. And there is no other way, every tourist wants to touch the history of dark beer, which has conquered the taste buds of its millions of fans around the world.

Arthur Guinness is the man who created the most famous beer in the world! Arthur first rented a brewery about 20 kilometers from Dublin (in 1755), where he brewed ale, a popular type of beer at the time. In 1759 he concluded the contract of his life and probably one of the best deals in the history of brewing. Moves production to the city, renting a property next to St. James’s Gate for 9,000 years for £ 45 a year!

We had stayed only on 10 minutes on foot and to get to the entrance of the brewery we succeeded to wander around it. Every corner of the cobbled narrow streets with slippery old tram lines running along the stone walls of the factory with massive wooden gates is my favorite part of Dublin!

We had booked an early appointment, perhaps the earliest possible. We wanted to avoid crowds of tourists and we succeeded. Validation of the reservation is very easy, as there are machines for those with an online ticket that give you a physical ticket. Keep it, you will need it later in the tour. You can book the visit easily from the site – HERE. 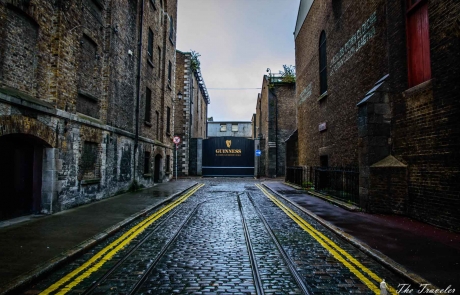 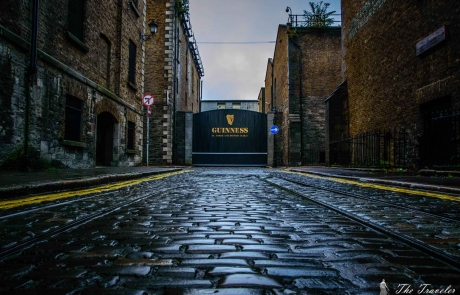 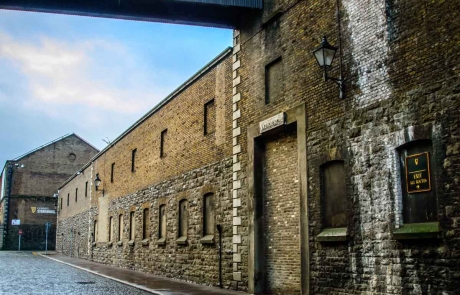 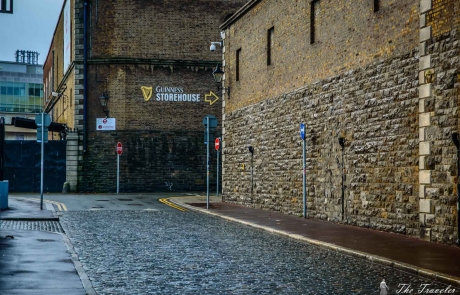 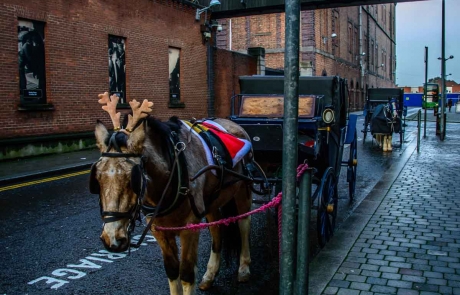 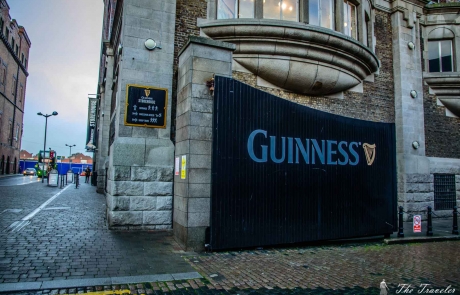 In 1778, a new type of beer, porter, entered at Britain. Conquered by the new trend, Guinness began its production in parallel with the current on ale. In 1799, the production of ale was completely stopped and the brewery focused only on making dark beer.

Subsequently, the recipe is subject to change and this leads to the emergence of the so-called stout. And what exactly is the difference between porter and stout is the subject of many debates and a specific answer is missing to this day…

In the world of Guinness

The museum, if you can call it that, has seven floors! The Guinness House has been open to visitors since 2000, presenting information to visitors in a very interesting and interactive way. The ground floor and the first floor are about the history of beer and the life of Arthur Guinness. Here’s a treat for the senses, where you can learn about the aromas and four simple ingredients of dark beer – barley (both malted and roasted), hops, yeast and water.

The third floor is my favorite – the Guinness ads over the years. A great exhibition presents the development of the bottle and the can. We are introduced to some of the most iconic advertising campaigns, such as the one with a metal fish riding a bike and a model of the Guinness Festival clock, which was positioned in the city. A popular harp logo began to be used as a trademark of beer in 1862 and is based on a popular 14th-century Irish harp (O’Neill or Brian Boru harp) stored in Trinity College.

💡 In 1929, the slogan “Guinness is good for you” was first introduced, which was launched by doctors. During 40 years, the brand has advertised that beer has healing properties.

💡 In the 1950s, the brewery’s managing director, Sir Hugh Beaver, decided to create a handbook with facts to resolve much of the controversy in British pubs. This is how the idea for the “Guinness Book of Records” was born. 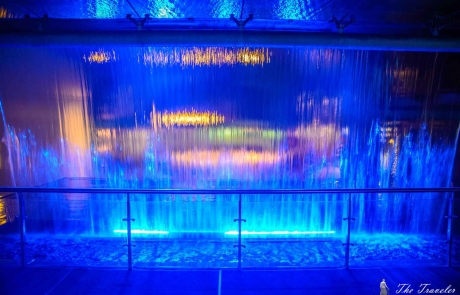 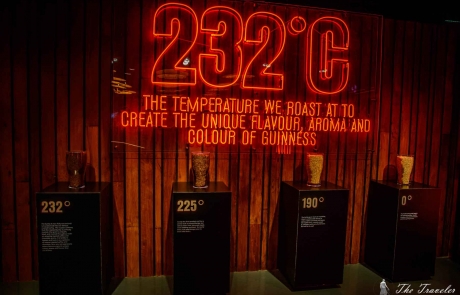 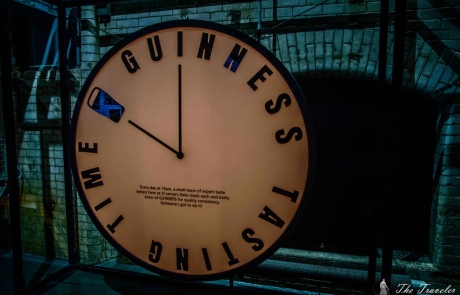 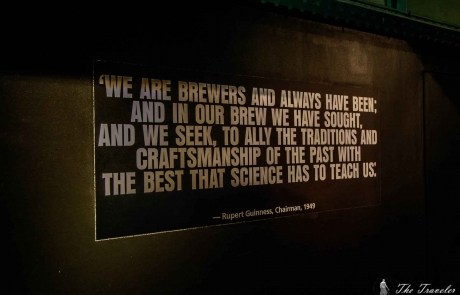 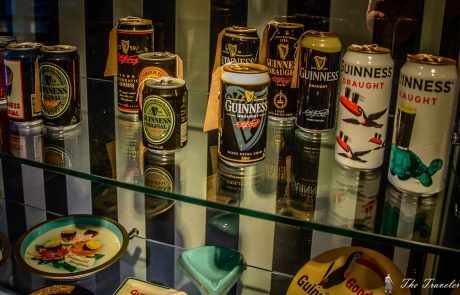 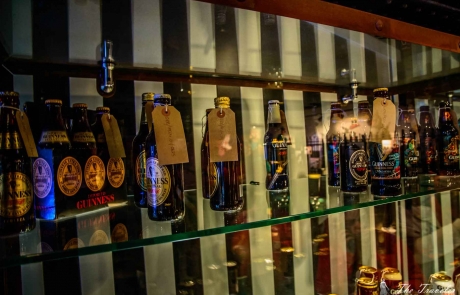 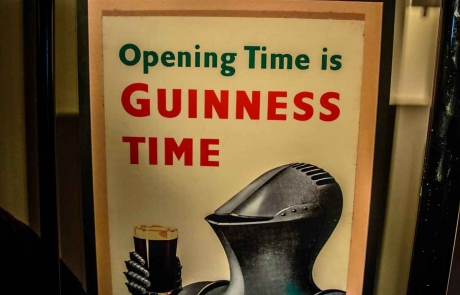 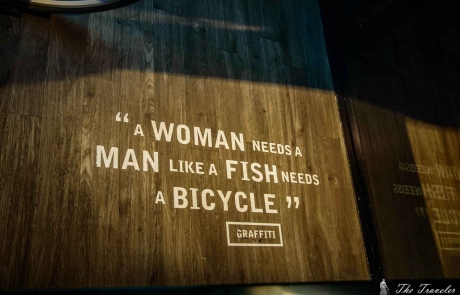 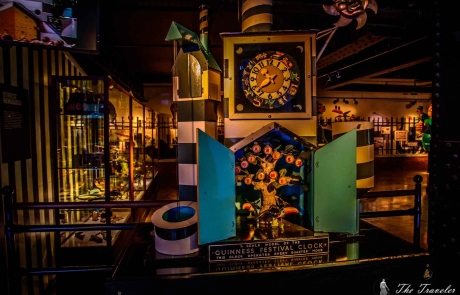 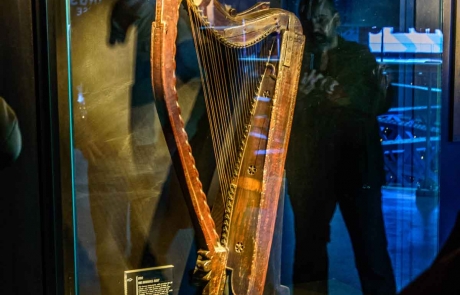 The fourth floor is one of the most interesting – the Guinness Academy. Here it’s time to take a course on the perfect pouring of a glass or pint, as is popular here, of the best beer in the world. Pouring itself is a whole ritual and therefore deserves a certificate, which is obtained at the end of training!

We have glasses and a tap available to make your try! The perfect pour lasts exactly 125.27 seconds and must be used official Guinness glass. Before pulling the tap, we must make sure that we keep the cup close to it, but without it touching the glass and necessarily at an angle of 45 degrees. Fill the cup three-quarters full or to the top of the harp, gradually straightening at the end. The most important stage of pouring follows! The glass is set aside so that the drink can settle. For the final step, we need to push the tap in the opposite direction and slowly add the creamy finish to a perfect Guinness glass!

💡 If you order Guinness, you have to wait a while from receiving the glass to the first sip. And the first sip should be large enough so that you don’t get a bitter taste.

I mentioned to you at the beginning to save your ticket! You can use it here or at the open-air bar on the top floor to enjoy a free glass of Guinness. We chose to take advantage here so we could drink the beer we poured ourselves! 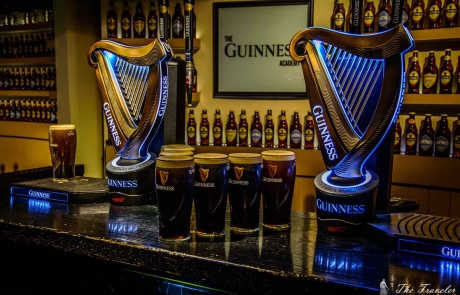 Panorama over the city

The sixth floor has restaurants and the last has a lovely bar that offers beautiful panoramic views of Dublin. Yep, it’s worth sitting down for a while and enjoying this great view of some of the city’s rooftops…

We ended this exciting journey in the world of Guinness with a tour of the store. There is a huge variety of products on offer! From weird food offerings to unique accessories and clothes. I personally decided to take the first porter that the brewery offered… 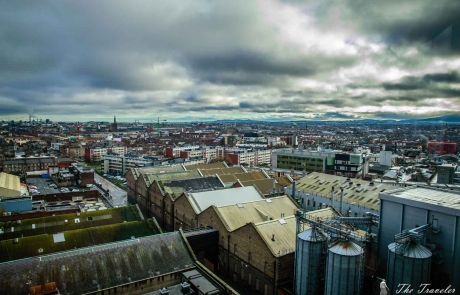 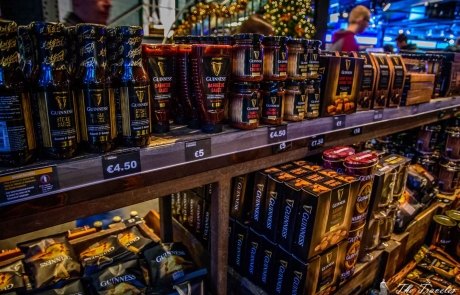 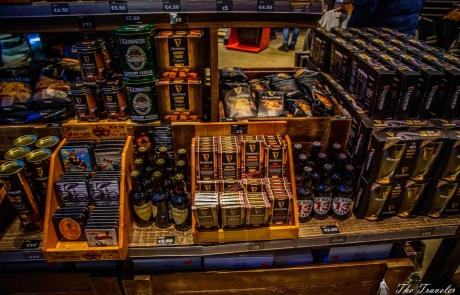