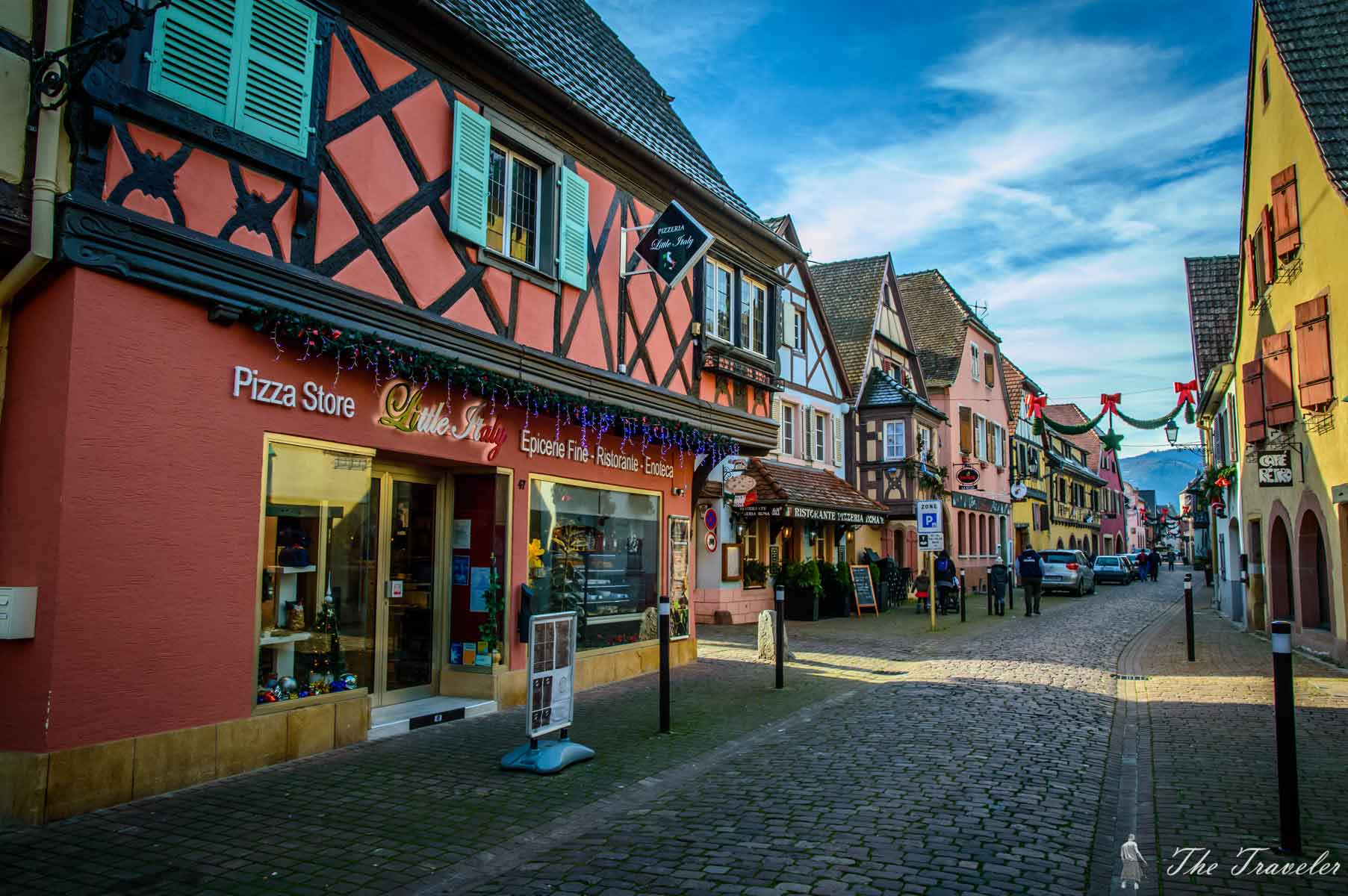 Alsace… synonymous with Christmas in Europe! Every corner in this area is magical in December! We will go to another place on the “Wine Route” – the small but charming town of Turckheim. Apart from the traditional half-timbered houses, the place impresses with its interesting Christmas bazaar. For him… after a while!

Turckheim is located at the eastern slopes of the French mountain Vosges. The distance to Colmar is about 7 km and takes 15 minutes by car. Eguisheim (one of the most famous French villages) is only 8 km away! There is regular transport between the towns in the area due to the high flow of tourists, but it is most convenient to travel by car.

In Turckheim you can use the free parking in front of the city gates – HERE! It is spacious and has enough space га as long as it isn’t a market day! We visited it on Friday midday and hit the exact moment when the buses and stalls started to leave the space… We were lucky enough to sneak between them in one of the few vacancies.

Through the main gate of Turckheim

The town is small, and the central part begins immediately after the main gate – Porte de France. It dates back to 1330 and crossing it is like falling into a fairytale world! The square behind the gate is charming! Colorful, pretty, beautifully decorated and it misses the crowd of tourists! Yep, in the midst of the Christmas bazaars in Alsace (December 6), there aren’t crowds here!

Turckheim impresses from the first steps on its streets. Each house contributes to the Christmas mood, and behind the central fountain is the Christmas market. Right next to the fountain is the house of the night watchman. The town is one of the few places in France where there is still a night watchman. Every night at 22:00, he goes out on the cobbled streets in his special suit and announces them in Alsatian shouts: „Han sori zu Fir und Liacht” – “Be careful with fire and candles!”, to prevent the possibility of inadvertent fire. A tradition that dates back more than 50 years. 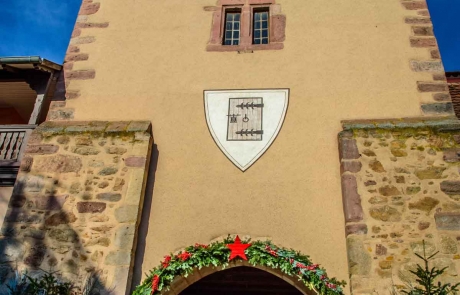 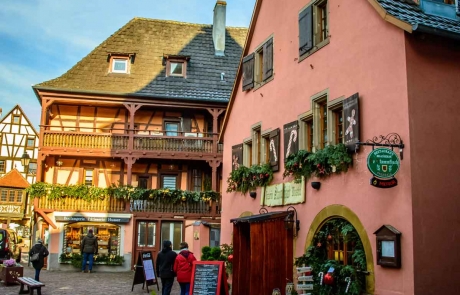 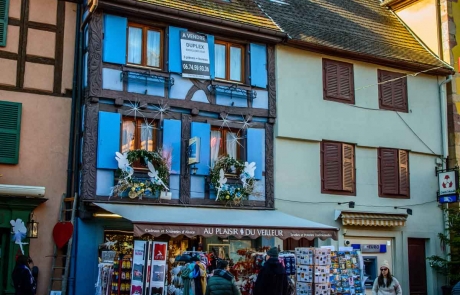 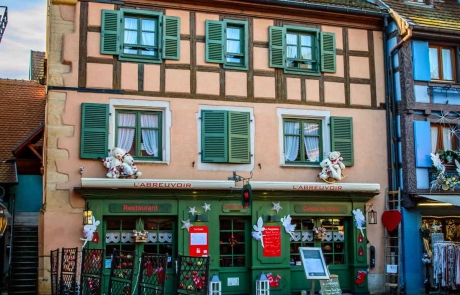 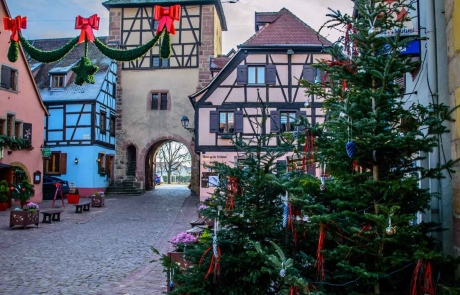 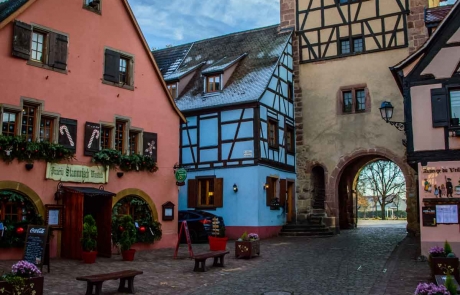 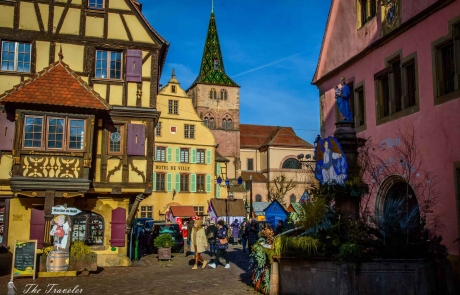 A Christmas tree and various figures decorate the city garden, but our attention is riveted by the huge Advent calendar! This magical decor has its purpose. Every day from the 1st to the 24th of December at 5 pm, at a special ceremony, one of the windows opens, depicting historical, religious or legendary characters from the area. 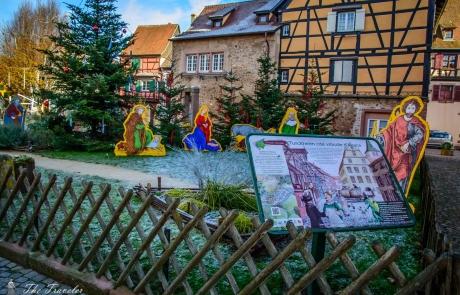 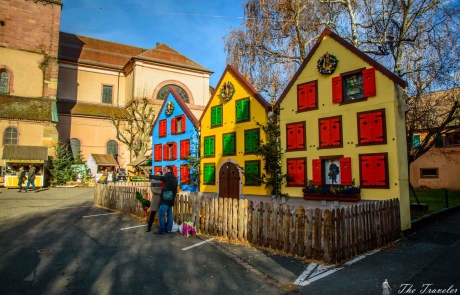 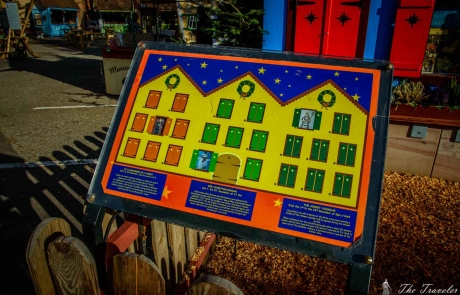 Looking up, it is inevitable to miss the colorful mosaic on the roof of St. Anne’s Catholic Church. Right next to it is the town hall of Turckheim, and on the square in front of the two buildings is built a fabulous market! It is significantly different from most that can be seen in Alsace! The houses are so colorful and each has an individual vision. They have a different purpose, as some of the places are like craft workshops, and others are just like shops. The place is a great stage for regional artisans! Naturally, the local wine is in the forefront, which is a must to try everywhere. And in the small well you can drop a deliberate wish and it will magically come true! 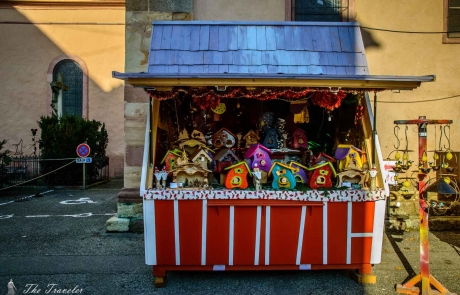 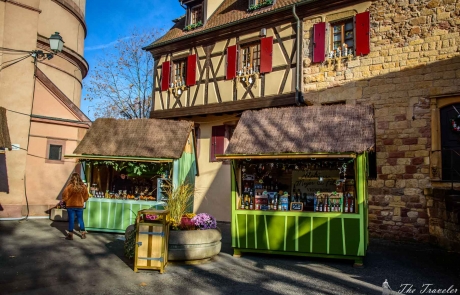 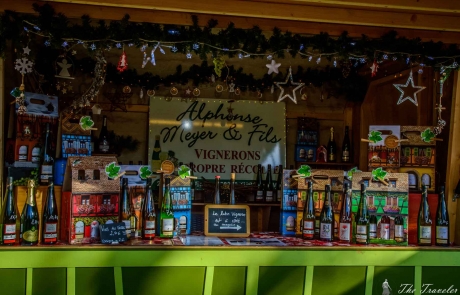 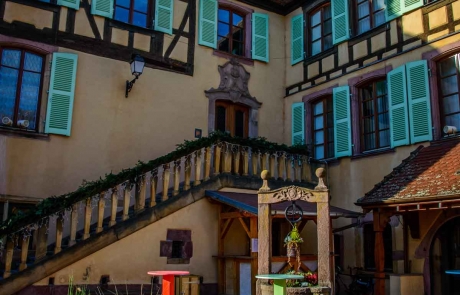 There isn’t way to miss this wonderful mansion! The semi-wooden structure catches the eye with its unique facade. The place was first mentioned in 1540, when it was called “L’Aigle Noir” (Black Eagle). Today it is a functioning hotel, where most famous visitors to Turckheim have stayed. 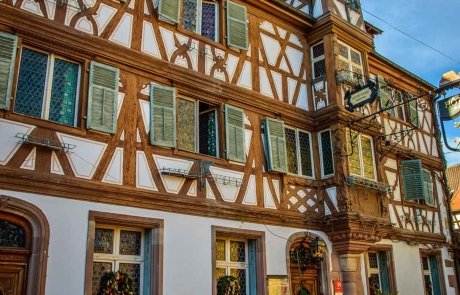 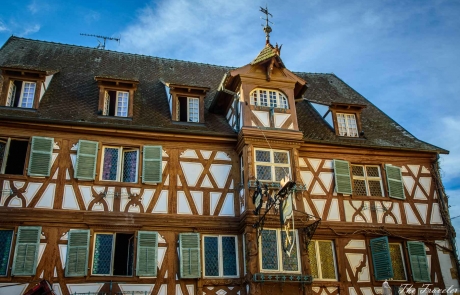 In contrast with the larger cities, the attractions here aren’t many and the biggest is the walk along the main street of Turckheim – Grand`Rue. Most of the town is concentrated around Porta France, but there is certainly more to see in the other direction! In the beginning there are several facades that make us gasp! And the street smells of freshly baked croissants, which comes from the small confectionery Pâtisserie Carl. We couldn’t resist and tried the ones with pistachio… 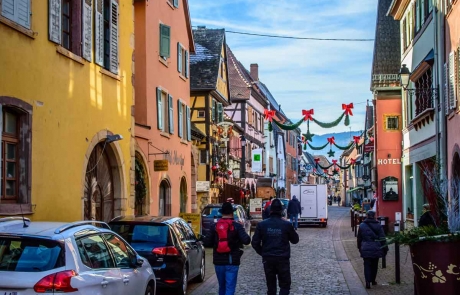 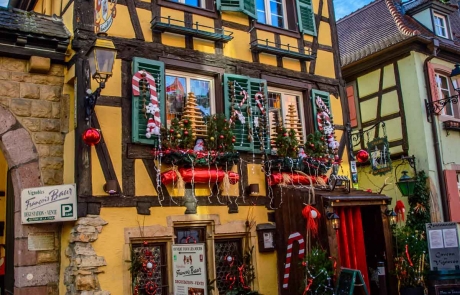 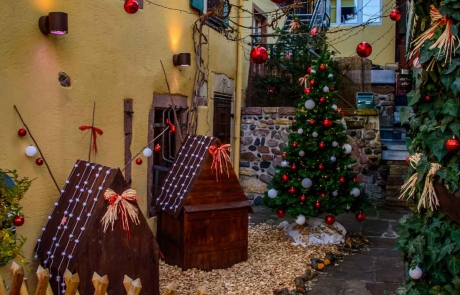 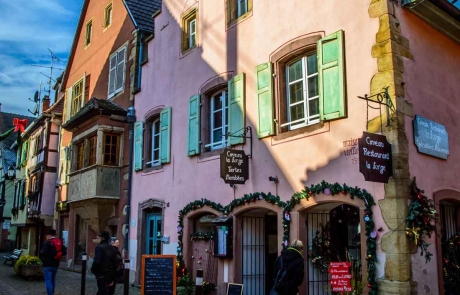 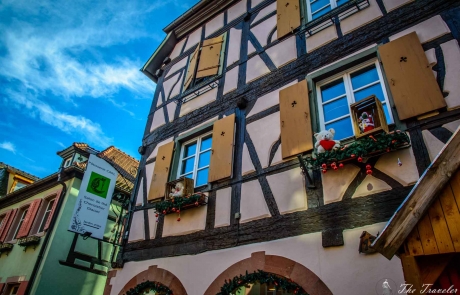 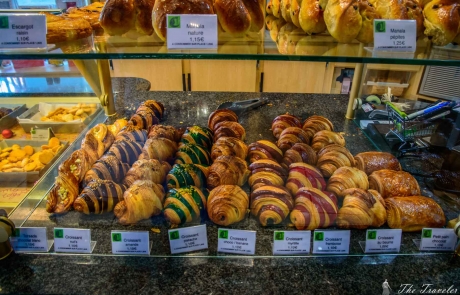 The area has been inhabited since Ancient Rome. The name of the city probably comes from the ancient German people – Thuringii, who settled in the lands of present-day Turckheim. The whole of Alsace is a mixture of German and French culture and has found itself in both the territories of one country and those of the other. This is the reason why it is so unique, beautiful and unrepeatable! The architecture in Turckheim has been preserved over the centuries and a walk along the Grand’Rue is like a journey back in time! Especially if at times you decide to deviate a little from the main street and look at the side streets. Beautiful Alsatian courtyards and facades, and the vineyards on the high slopes are in the background… 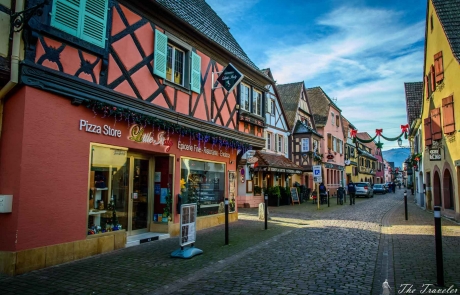 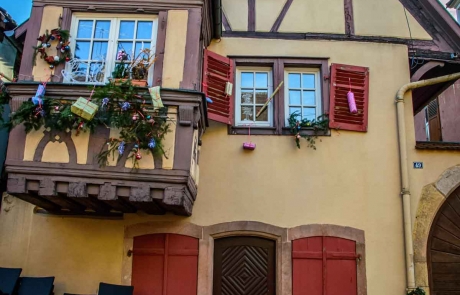 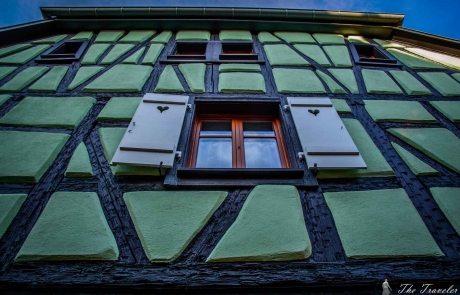 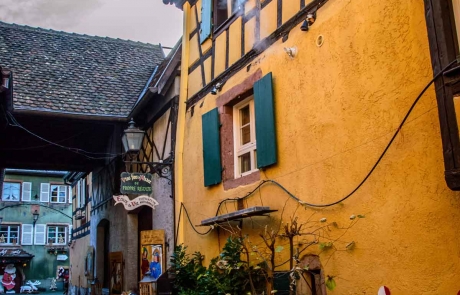 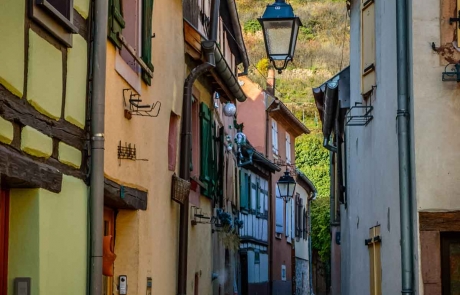 The main street ends at the end of the city gates, next to the Munster Gate. The second preserved tower in the town and a place of dark glory. In the past, witches were led here and burned at the stake. Passing through it, we encountered the Alsatian rural labor and the local grandfather, who with the help of his horse plowed the vineyard located on the slope… 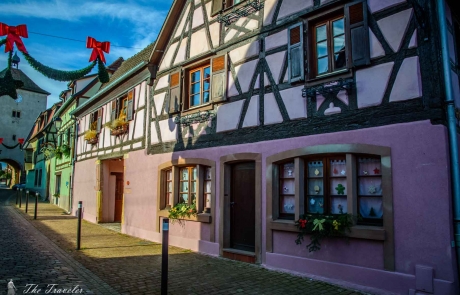 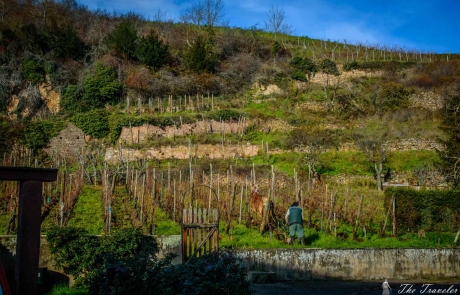 Turckheim is one of the small towns of Alsace, which is much calmer and different from the others. The Christmas market is unique and worth seeing! The decorations are ‘t so lavish, but they manage to create a pleasant enough Christmas atmosphere! A place that should be present in the list of every tourist in the region…