Palaios Panteleimonas – on the slopes of Olympus 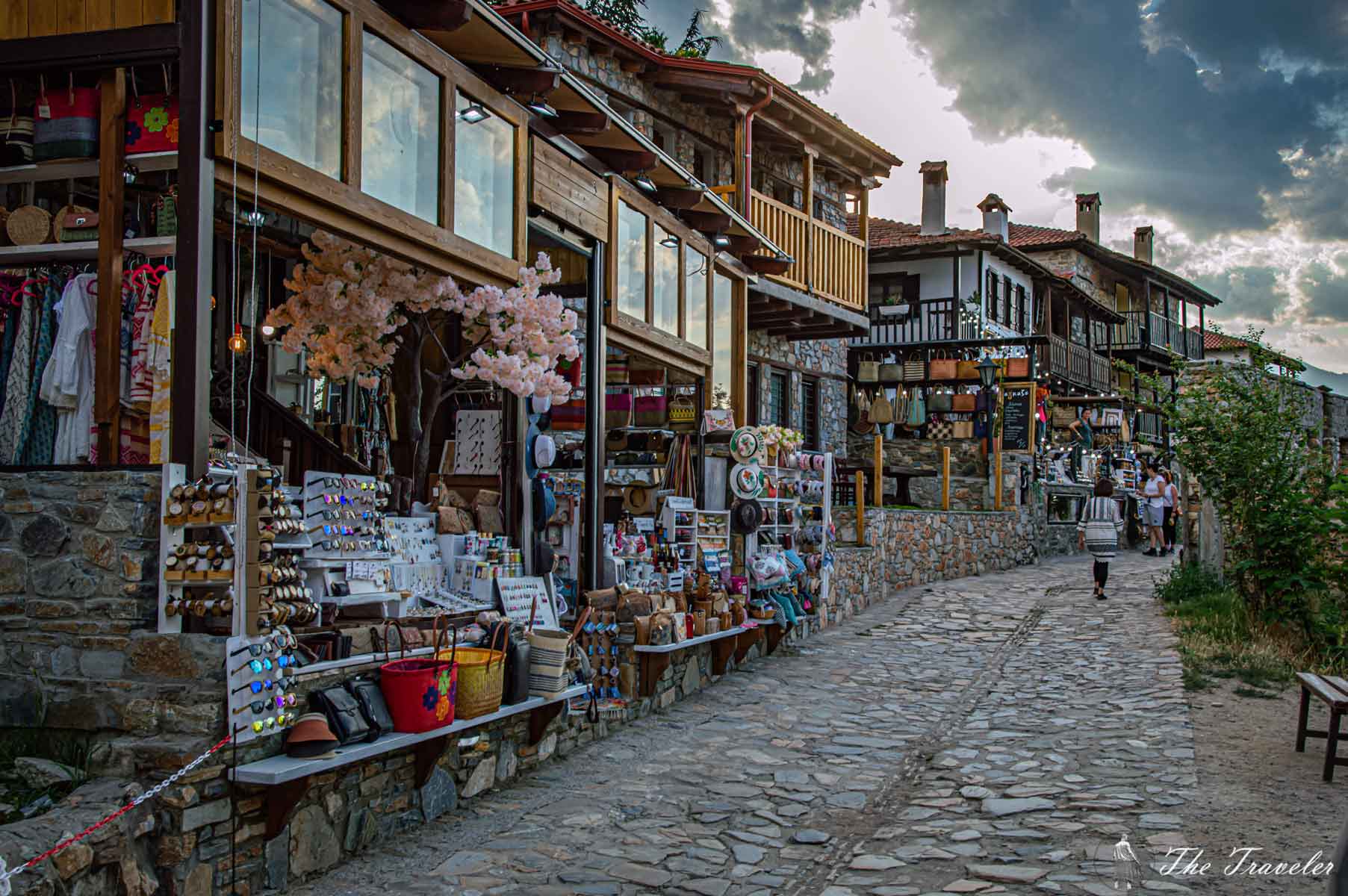 After a whole week on the beaches of Lefkada, we decided to look for a few intermediate stops on our way back to Bulgaria. The first was Metsovo, and for the second we stopped at Palaios Panteleimonas. That’s how we discovered this mountain jewel with a view over the Olympic Riviera…

Palaios Panteleimonas is a village located at about 700 meters above sea level at the foot of Mount Olympus. Its proximity to the beach makes it a perfect destination for a cool summer walk, but it’s suitable for visiting the rest of the year. The beautiful beaches of the Olympic Riviera are only 5 km away, and the famous resorts around it are Leptokarya (12 km) and Katerini (38 km).

The sleeping places in the village are limited and we couldn’t find freely for our visit, so we spent the night in Neos Panteleimonas – the new part near the coast. The distance between the two is only 3 km and is covered in 10 minutes on a relatively good road.

💡 If you have the opportunity to use the Epar.Od. Platamona-Penteleimona for arrival, take advantage. It’s relatively wider and good than the others.

Parking with a view

There is a large parking lot at the entrance to the village, right HERE. On it you park the car freely and immerse yourself in the peace and quiet of this heavenly place. A pleasant cobbled alley, completely isolated from cars, takes visitors to the heart of the village.

This place plays the role of a panoramic platform, which reveals a beautiful view of the entire coast and the houses of Palaios Panteleimonas, nestled among the greenery. It’s as if the blue waters of the Aegean Sea are trying to touch the mountain slopes… The afternoon sun was making its way through the thick clouds, to add a light orange hue to an otherwise mostly the green landscape… 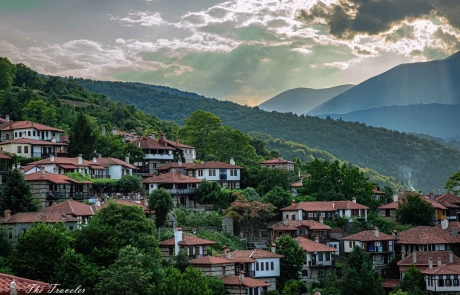 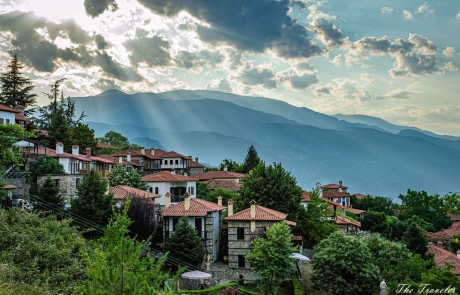 The first houses here were built in the early 15th century, but not all the time the village was active. In the 50s of the last century the place became depopulated. Many residents are leaving the country or settling in the new settlement (Neos Panteleimonas) near the sea, where it is much easier to make a living. Palaios Panteleimonas received its renaissance in 1980, when large-scale renovations began to make it a popular tourist destination.

💡 The village was supplied with electricity only in 2000, and until then there was no electricity in it!

Getting lost here is unthinkable… So don’t hesitate to deviate from the main street and peek between the balconies and courtyards of the houses, because there are beautiful views of the coast. And you can come across a wedding photo shoot, like us… 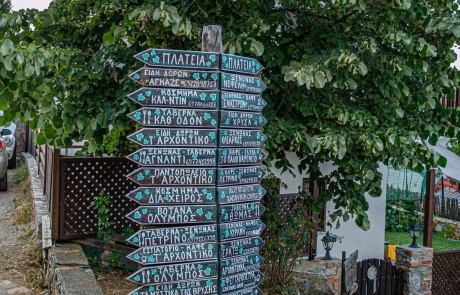 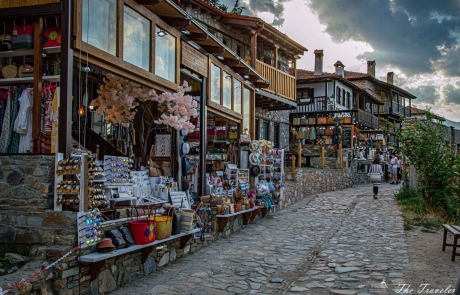 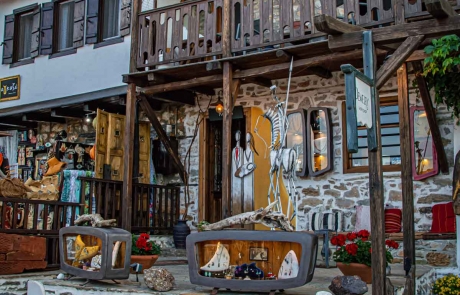 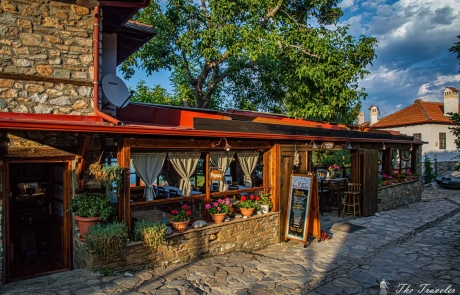 Most of the old houses have been turned into taverns, hotels and shops with traditional products. The permanent residents are around 10 families who develop the local businesses. You can find all kinds of handmade souvenirs, hats, jewelry, food, drinks and what not. Most of the things are unique and can only be found here!

We fell in love with one of the shops – Αρχοντικό Παραδοσιακό Παντοπωλείο! We were captivated by the many aromas of handmade soaps, bath salts, weird spices, tsipouro and a variety of sweet temptations. But let’s mention the tsipouro… This typical Greek drink, resembling Bulgarian rakia, is the pride of the village. The locals give it a unique flavor, adding to the standard ingredients and from the berries growing in the area. Especially interesting is the tsipouro from koumara (strawberry tree, traditionally mainly for the Mediterranean)! 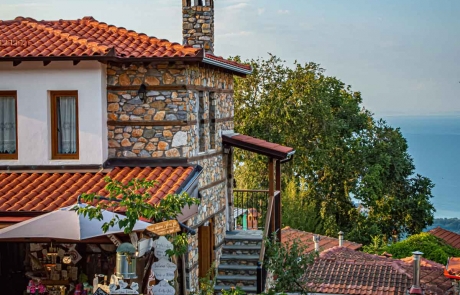 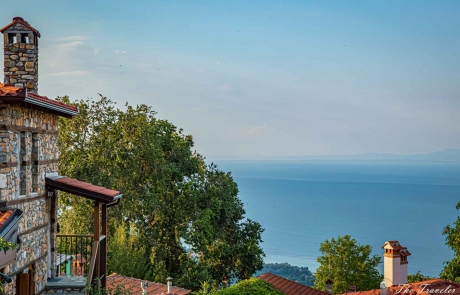 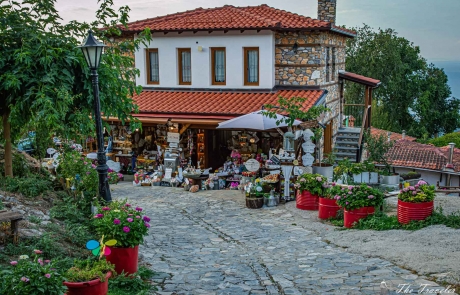 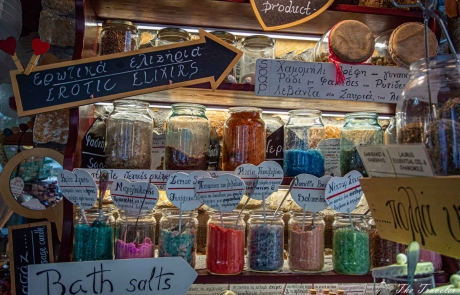 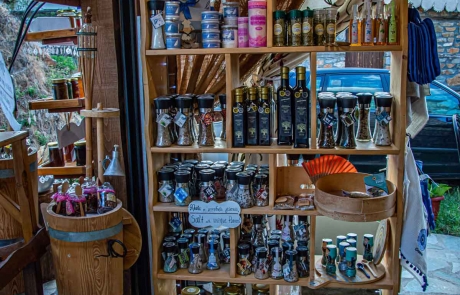 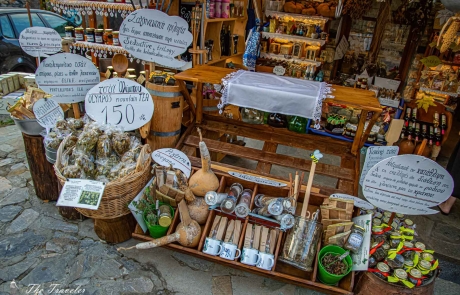 By the uneven cobblestones

We move slowly along the narrow streets and enjoy the stone houses with wooden beams and windows… Pots with colorful flowers are perched on the walls, and the mountain landscapes and the songs of the birds complete the idyll around us. In recent years, Palaios Panteleimonas has become one of the most beautiful Greek villages in the northern part of the country and from our walk we are convinced that there are many reasons for this!

The cobbled streets lead us to the central square, where a dense shadow of vines and ancient plane trees has settled. There is also the impressive church of St. Panteleimon, which in 2001 was declared a cultural monument. 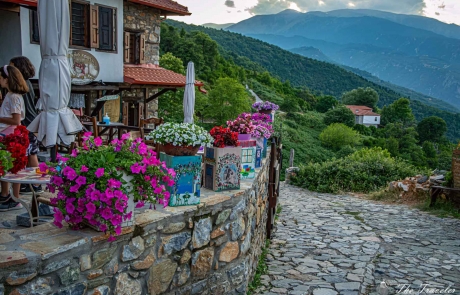 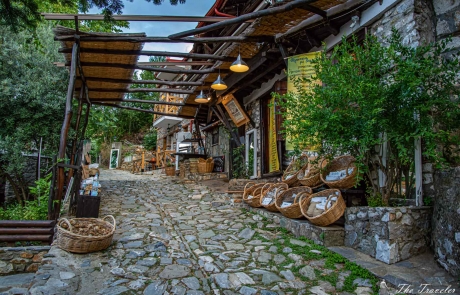 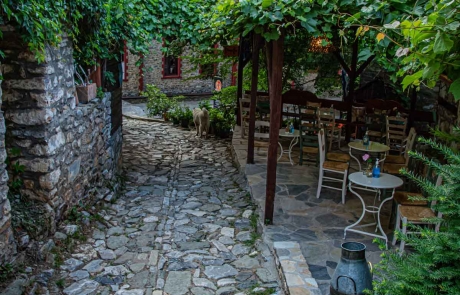 There aren’t many eating options, but the choice isn’t easy! We stopped at one of the nice central taverns – Taverna Olympos. The cool and shady tables seemed to us the perfect place to enjoy authentic Greek food. We were greeted with a special menu in Bulgarian and extremely friendly attitude. The portions were relatively large, and the pork knuckle and zucchini melted in the mouth. Unlike all the places in Lefkada where there was no sweet compliment, here we received a fresh portion of fruit for dessert! The prices were also very good. 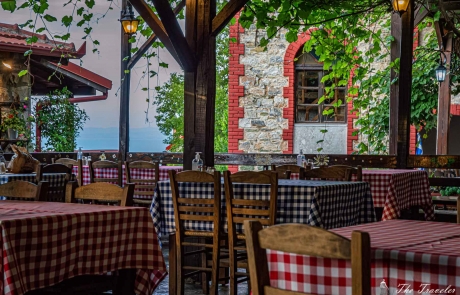 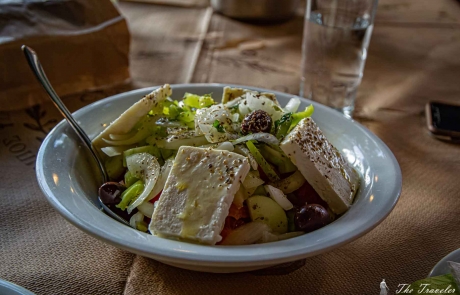 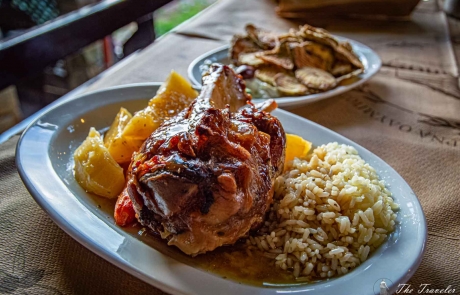 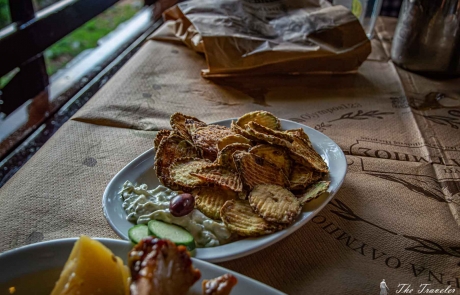 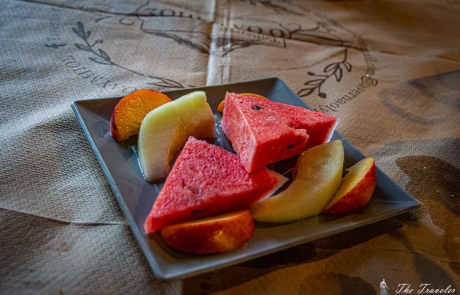 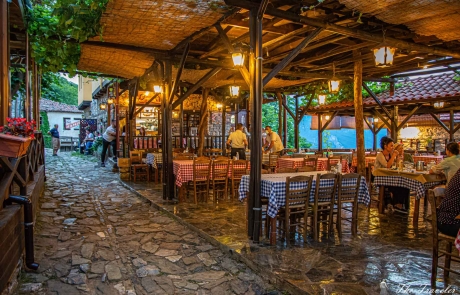 We decided to enjoy a little more of the magical atmosphere in Palaios Panteleimonas and embarked on a new tour of the winding paths… We found interesting places, and the lights from the lamps on the impressive architecture and the gloomy sky, created a fabulous look of the village… 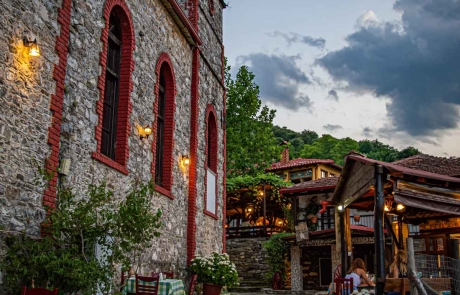 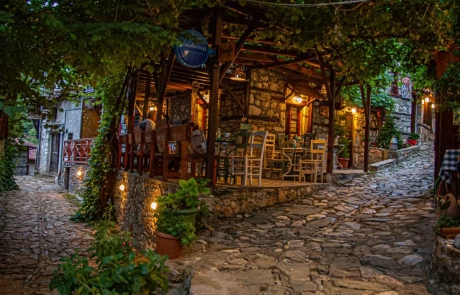 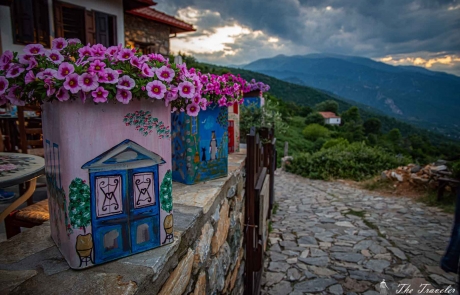 And just when we thought we had seen everything possible here and headed for the car, the night view decided to surprise us… We stayed on the terrace until the last rays of the sun disappeared, and the only sources of light around us were the few lamps scattered around the village. What an end to our whole summer trip around Greece! We were sitting down on a stone wall in the pretty village of Palaios Panteleimonas, somewhere on the slopes of Olympus, with their legs dangling in nowhere. And below us… the Greek sea… with all its summer excitements! 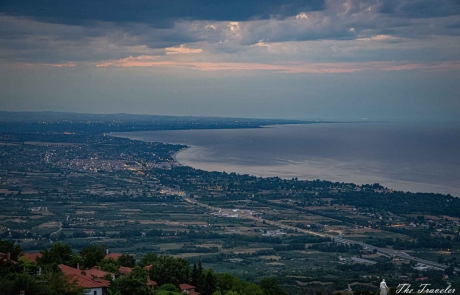 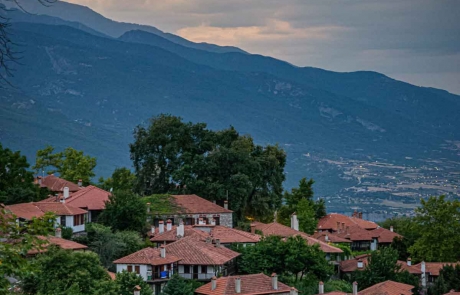 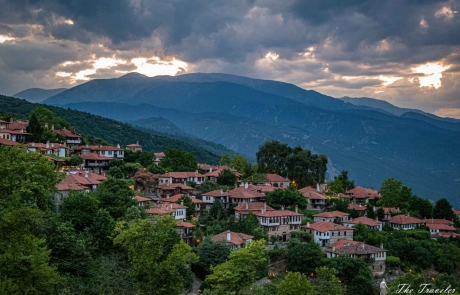 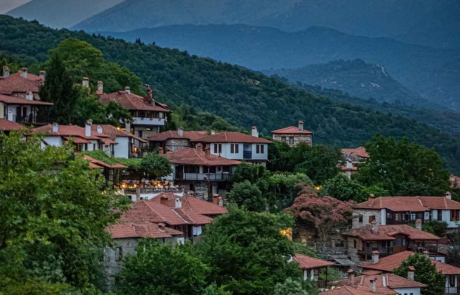