The colors of Liguria – Manarola 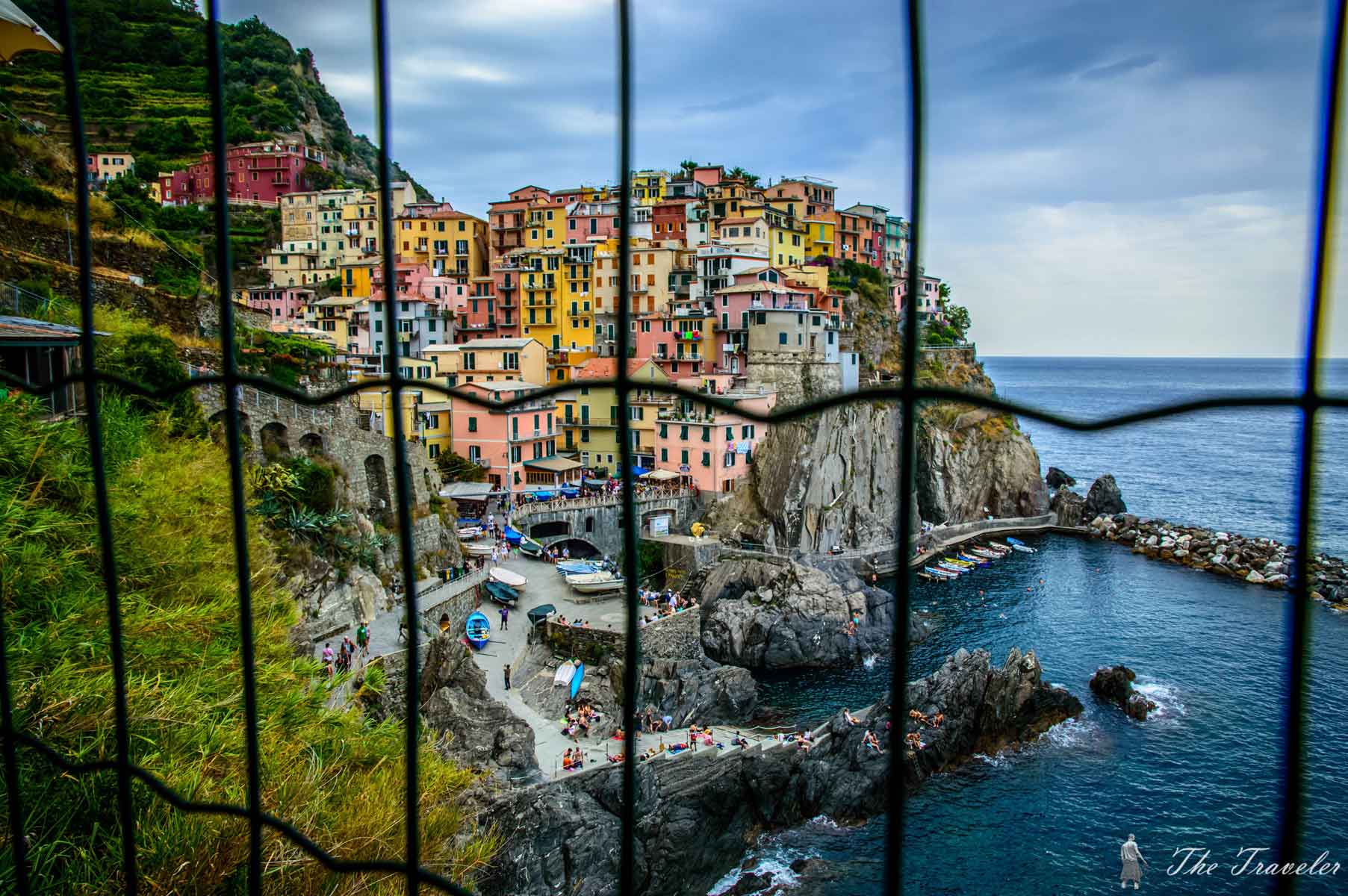 Many people have never heard of Cinque Terre, until somewhere on the Internet they come across a picture of colorful houses perched on sheer cliffs rising from the sea… It takes them a while to figure out from where is the photo and it almost always turns out to be the most recognizable and iconic village of the five… Manarola!

On the path of love

Manarola is the second settlement in a row, right after Riomaggiore. They are separated by about 2.5 km by transport and only 1 km walking distance. I have already mentioned to you that the walking route through the “Five Lands” – the Blue Path (Sentiero Azzurro) starts from Riomaggiore, and Manarola is the first stop on it. The section between the two villages is called the “Path of Love” (Via dell’Amore) and is the shortest and easiest of all, and also the most beautiful!

The trail was permanently established after the Second World War and gives the opportunity for the creation of love thrills between the young inhabitants of the two villages… Its name comes from there. Over the years, however, it is often closed due to landslides… But there are some 20 meters in the part of Manarola that can be seen. They are located just above the Railway Station.

In the streets of Manarola

The station is located outside the center and a tunnel leads to the interior of Manarola. It sounds a bit complicated, but actually the orientation is very easy, just follow the crowds of tourists! Here the crowds are almost all year round!

We find ourselves in the modest Piazza Capellini and follow the choice for a short or long route through Manarola. For the long one you have to turn right, towards the church of San Lorenzo. Keep in mind that the climb isn’t small… From there, on Via Rollandi and Via Belvedere, you can descend all the way to the coast and return to Piazza Cappellini. Well, we decided we wouldn’t miss out so much if we cut it! To do this, we headed directly to the most beautiful part of Manarola and took the short route… to the left on the main street via Renato Birolli.

The story of Manarola begins before that of Riomaggiore! The first information about the village dates back to 1261. It is believed that the inhabitants of Volastra, a settlement inland above the coast, moved to the coast and founded Manarola. They have inhabited the areas since Roman times, managing the terraced lands, planting olives, lemons, vineyards and in the XII century settled by the sea! 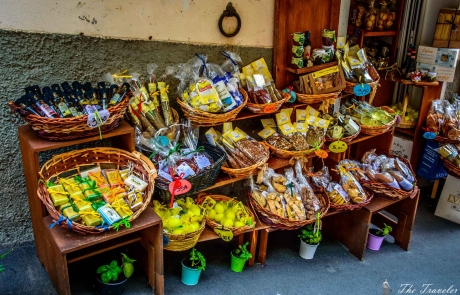 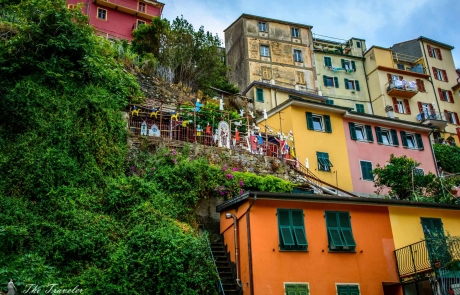 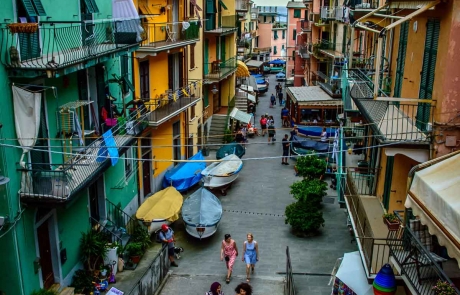 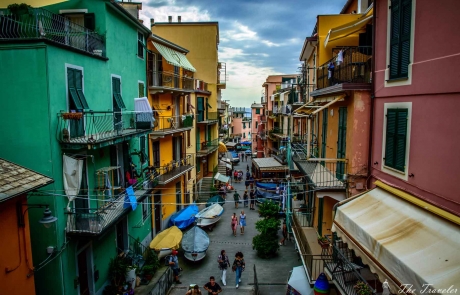 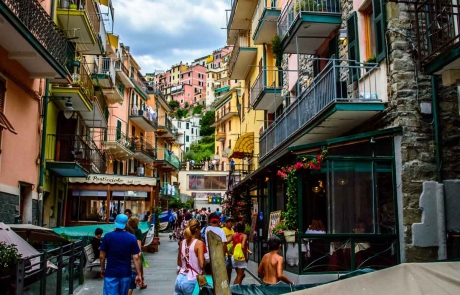 The walk along the main street doesn’t take much time and you quickly reach the coast. All five villages are known for the fact that the many cars parked on the streets of an average town, here have been replaced by fishing boats. It is in Manarola that they abound and create a charm that cannot be seen anywhere else. It is no coincidence that it is part of the most beautiful Italian villages!

And the pier is usually filled with tourists jumping off the cliffs, diving or just sitting to admire the beautiful view of the houses on the slope and the terraced plants opposite. I myself regretted that I hadn’t prepared for a quick jump and a few minutes on my back in the water, looking at the palette of colors on the gloomy rocks.

Early in the morning you may be lucky enough to come across local fishermen preparing the boats for another adventure in the water or in the late afternoon, when they are pulled ashore by crane… 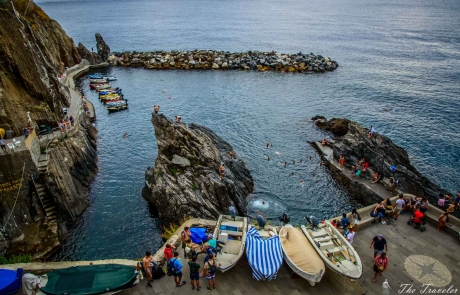 We had left Manarola for the third stop on the Cinque Terre tour so that our lunch could fall here. The fact is that the village has many delicious restaurants, but we could not miss the most famous and popular among them… Nessun Dorma! Many people consider it overpraised and with inflated prices… Honestly… prices are really a little inflated, but this view is worth every cent… The romance and atmosphere of the restaurant are priceless!

There is usually a huge queue at the entrance, but we were lucky and waited only 20 minutes. We were even luckier when we were seated at an inner table, but at the same moment one next to the fences was free! Well, we took advantage! A glass of local wine, bruschetta with pesto, some Italian prosciutto and the amazing view of Manarola… No matter how diverse the comments are about Nessun Dorma, it is definitely worth a visit! 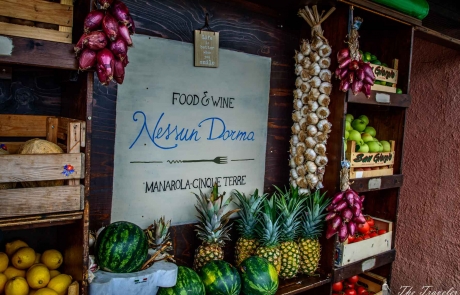 The most beautiful view in Manarola

That’s what we were waiting for, wasn’t it? The most beautiful panorama to Manarola, unfolding very close to the restaurant! This is the place that attracts thousands of photographers from all over the world! The trail stretches along the entire length of the rock, and at the end there is a small park suitable for recreation. I’m sure you’ll want to capture the view from every possible angle… A few steps to the left… now to the right… At first glance, many identical shots, but each has its own individuality! Now you understand why the most recognizable photos of Cinque Terre are from here… 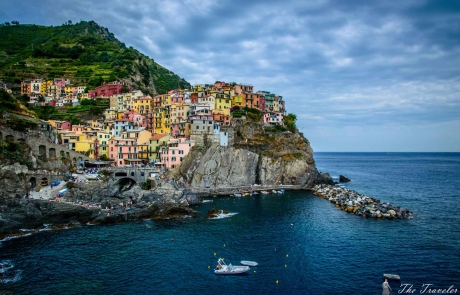 Manarola is the village with the most beautiful view, with the steepest cliffs and the most parked boats… That place you once saw in a photo and wondered where it is and how to get there… It makes you enjoy life, admire the beautiful landscapes with a glass of wonderful wine… accompanied by the sounds of the stormy sea…