The colors of Liguria – Monterosso 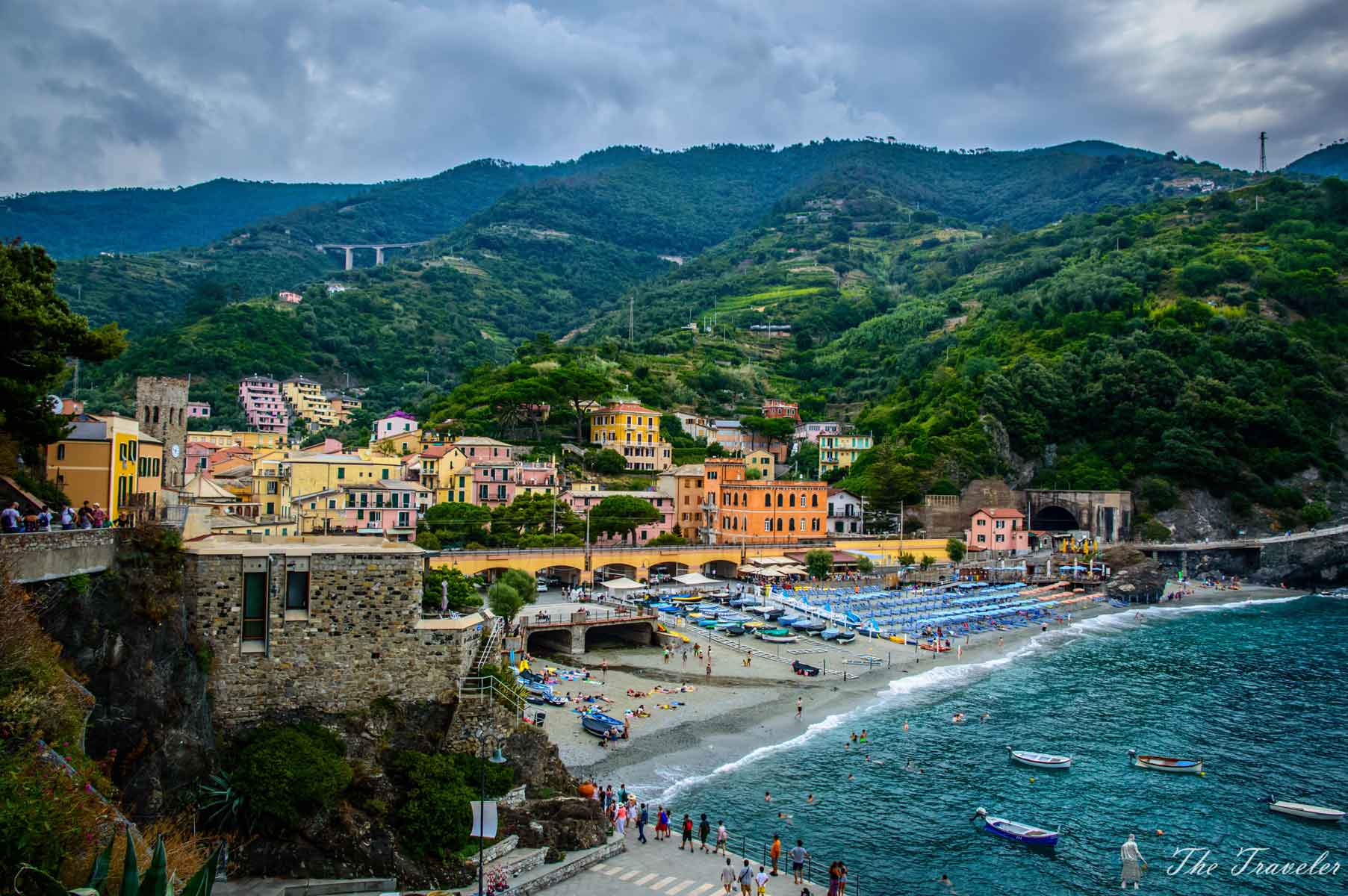 If you think that the Cinque Terre area is just rocky shores and stones, you are wrong! We reached the last of the five villages – the most resort and with the most beautiful and sandy beaches… Monterosso!

The northernmost village of the five is Monterosso. It is located around 4 km walking distance from Vernazza and around 20 km by car! That is why the train remains the most convenient transport to visit!

It is divided into two parts, new and old, which are separated by the hill of San Cristoforo. The difference between the two is obvious and easy to detect. While the old part resembles the other villages in Cinque Terre, the new one resembles most seaside resorts. There is a large percentage of the accommodation in the area. This is the reason why Monterosso is most often chosen as a starting point in the five villages.

The train station and the new part of Monterosso

The station is located in the new part of the resort, right next to the large beaches. Even coming out of it we are captivated by the view of the sea… Flowering trees and local carpet sellers create additional color to the landscape. In fact, the entire promenade along the coast is strewn with many oleanders, bougainvillea and palm trees. And among them are local merchants, artists and performers. 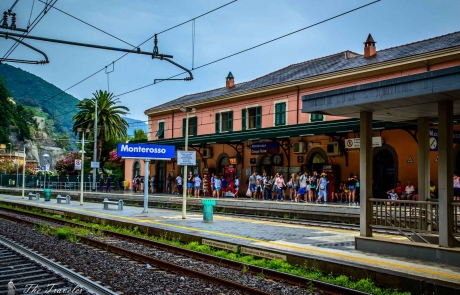 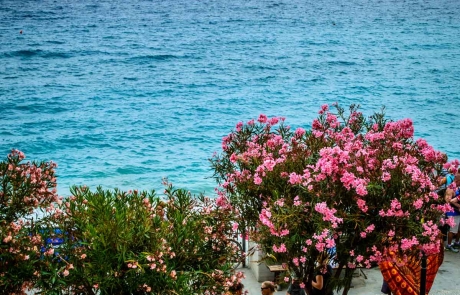 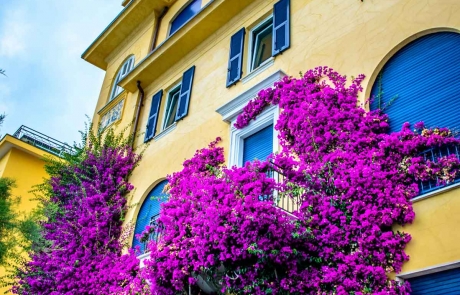 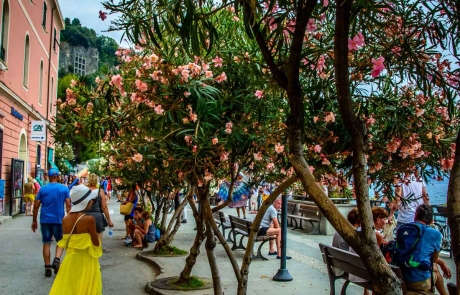 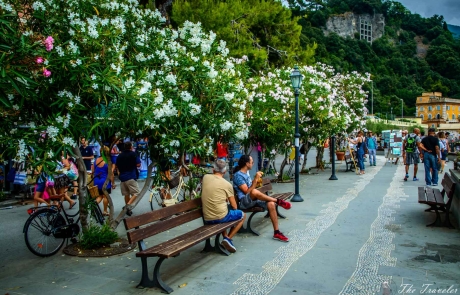 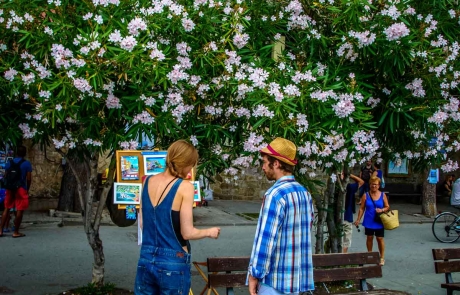 The inside of the new part doesn’t attract with anything, there are only hotels and they will certainly not be interesting to us. The only thing that impresses here is the statue of the giant, located in the northernmost part. Unfortunately, it was under restoration. It is a stone giant holding a rock above him on its back. It actually depicts Neptune and symbolizes the prosperity of Monterosso in the early 20th century, which was realized thanks to the fishing industry. But the whole was wrapped in safety nets and therefore not worth wasting time, given that there isn’t way to see part of it…

The wide sandy beach is among the things that captivate tourists and make them book their holidays here. You can see the beach of Monterosso in many rankings for the most beautiful curves in Europe! Most are paid, but there are also small areas where access is free. 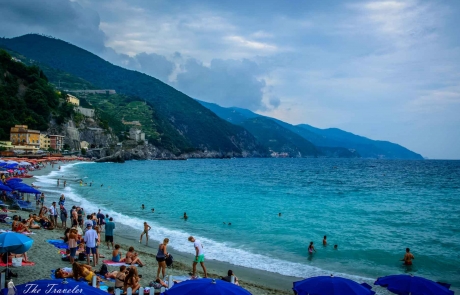 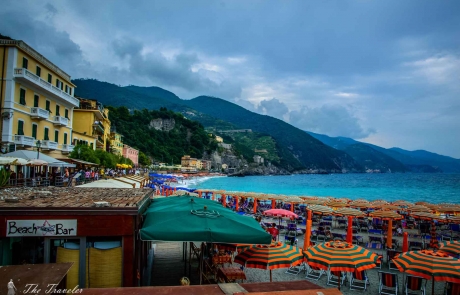 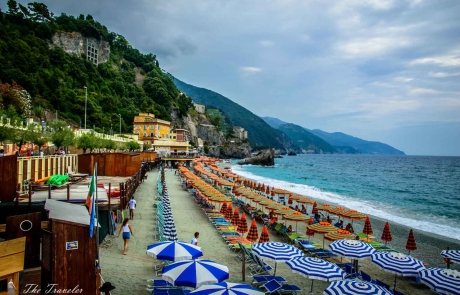 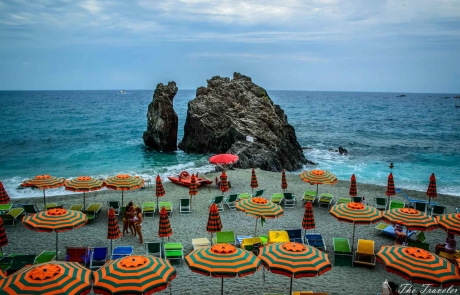 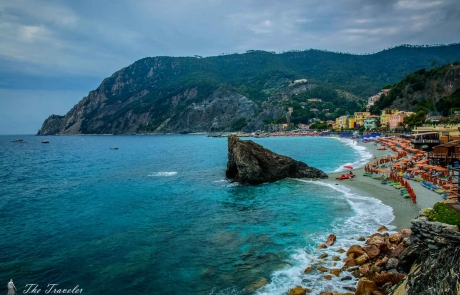 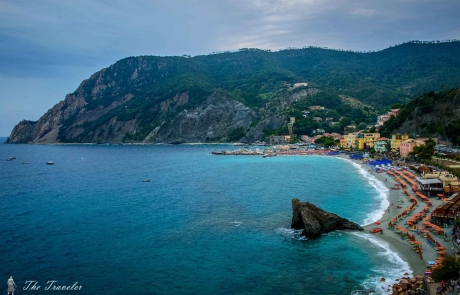 To the Aurora Tower

In the past, the village had an impressive defense system with 13 towers! Here, as in the other four villages, pirate raids were common. Today, only one of the towers remains – the Aurora Tower. It is located on the hill of San Cristoforo, dividing the new and the old part.

We take it along the pleasant beach promenade. At the end of the trail there is a tunnel that crosses the hill and takes tourists directly to the old part of the village. For the tower we take the stairs to the right of it. The climb here is like a walk in the park compared to other villages. The road passes right by it, and at the same moment, on the small pier under the tower, a tourist boat was mooring… 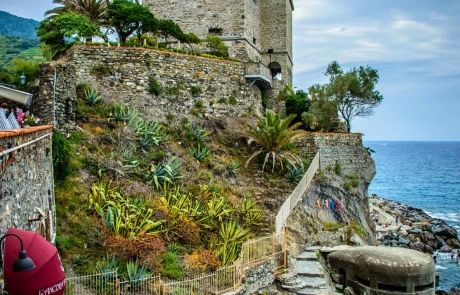 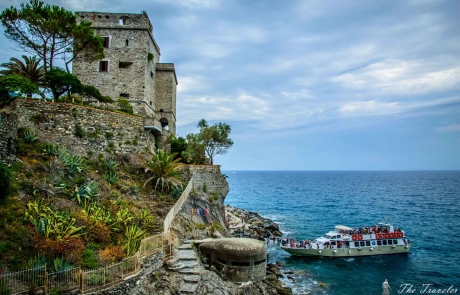 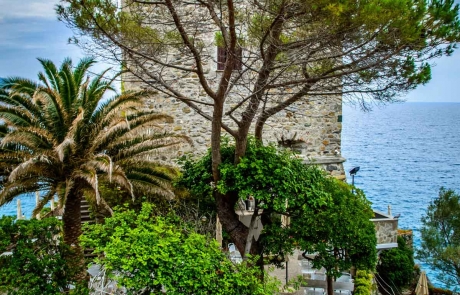 Immediately after the tower reveals one of the few views of the village and more precisely to its old part. Here is the other beach of Monterosso, and behind it are the colorful houses, resembling those in other villages. It is clear that the terrain is much flatter and the many climbs between narrow streets are missing. And the beach here is wide enough to accommodate a significant number of fishing boats. 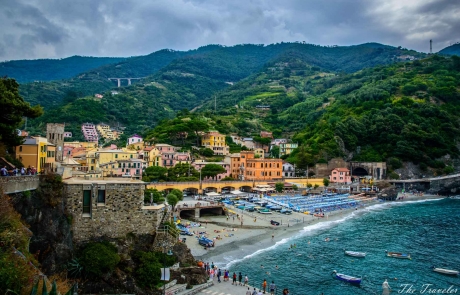 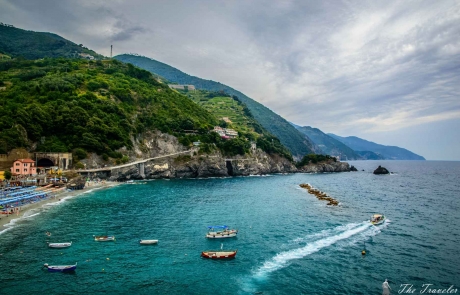 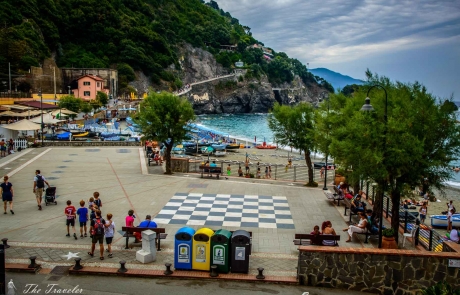 Shortly after the view we mix with the stream of tourists coming through the tunnel and together we cross under the railway lines to find ourselves in the heart of the old town – Garibaldi Square. We head to the small church of Monterosso – San Giovanni Battista. It dates from 1244 and features an interesting facade of white marble and green serpentine. The rosette window above the entrance is also impressive. 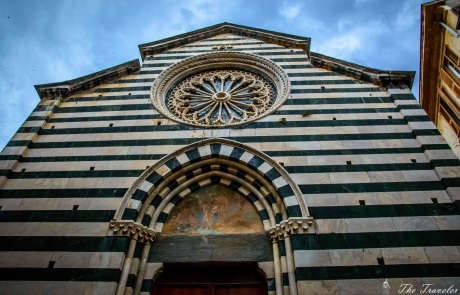 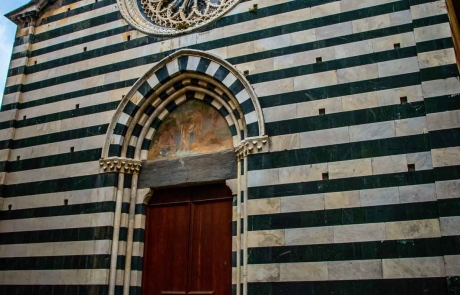 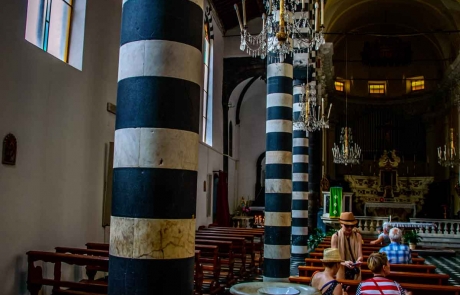 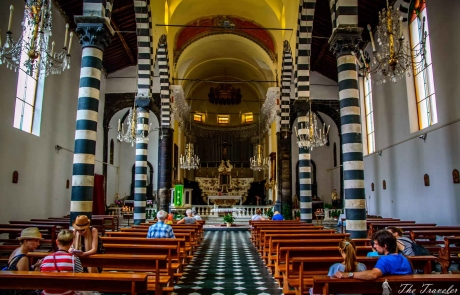 The old part and Garibaldi Square

We reached the most charming part of Monterosso, in my opinion. The pleasant atmosphere of the small streets, craft studios and interesting restaurants are combined with the lack of climbing and easy walking. Garibaldi Square is the heart of the city and a venue for various festivals and events, such as the Lemon Festival and the Anchovy Festival. In a short time, we walk around all beautiful streets… 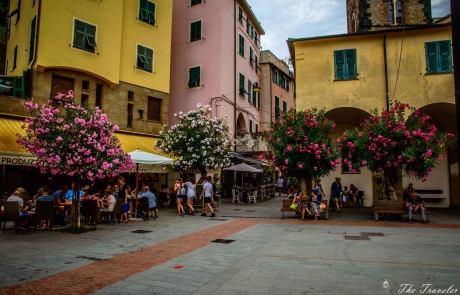 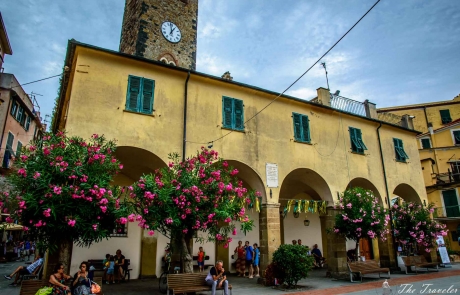 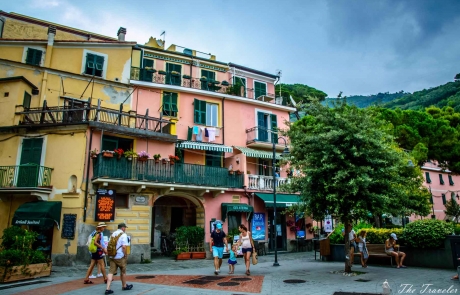 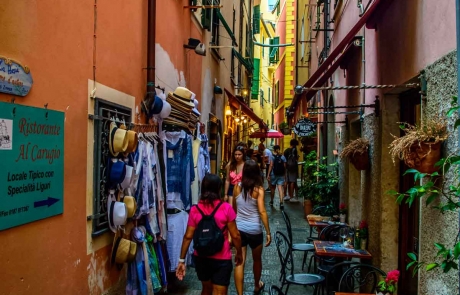 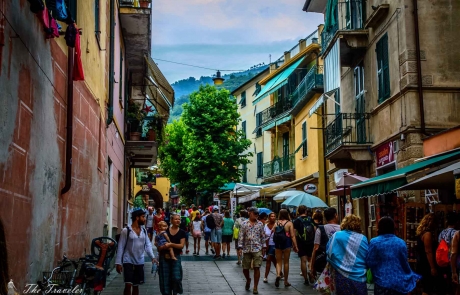 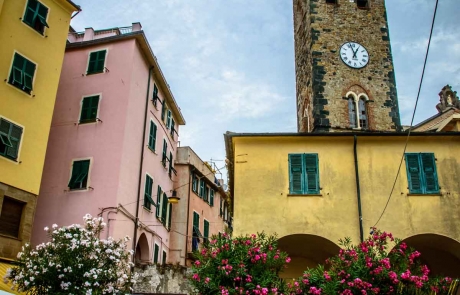 Monterosso is the village of all five that I would miss… if I had to choose one! But when visiting Cinque Terre it’s nice to see all five! For this it is worth taking some time and taking a quick tour of it. At least you don’t have to climb 😉