Tuscan landscapes – Buonconvento and The Abbey of Monte Oliveto Maggiore 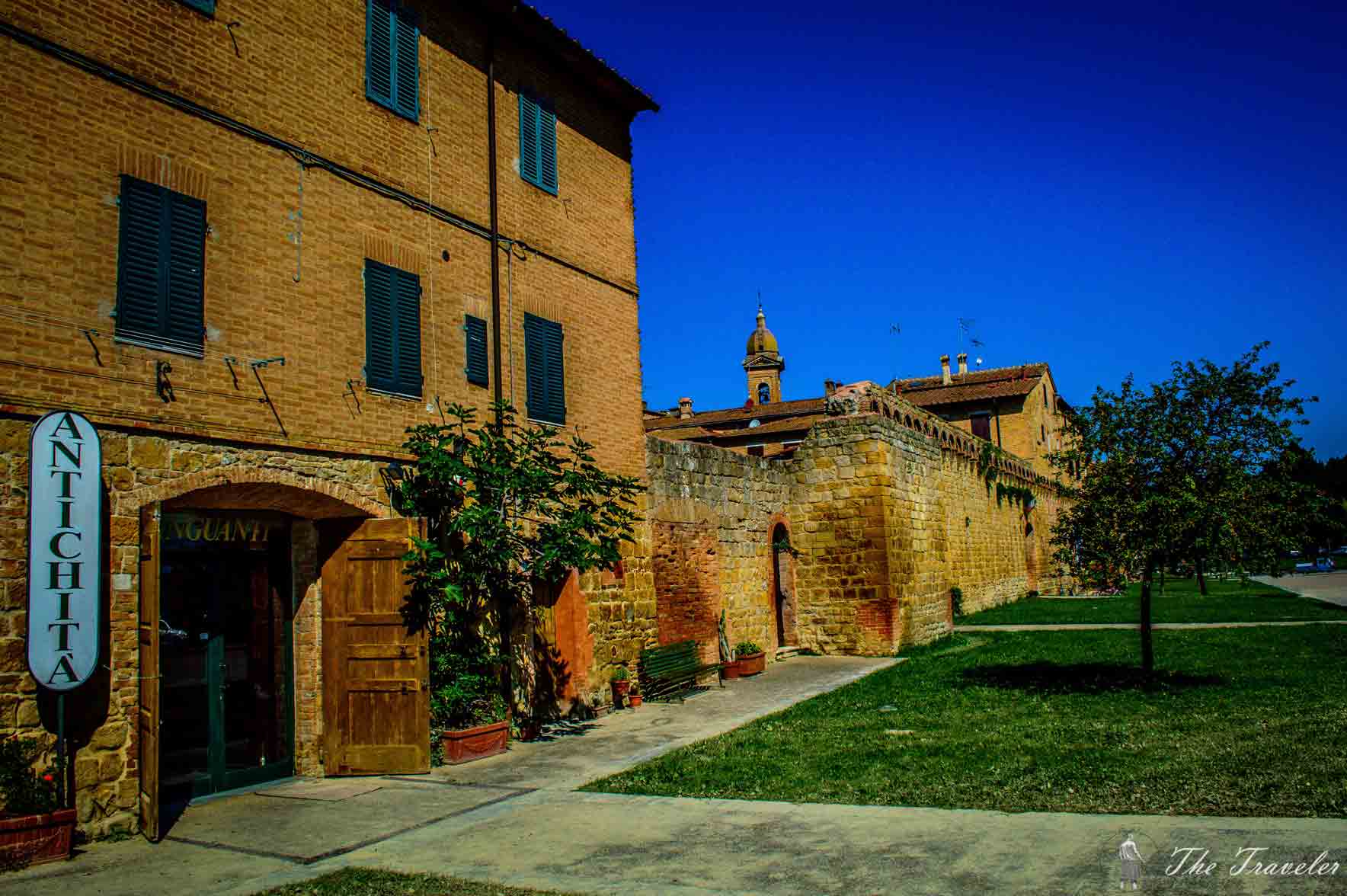 And again we are passing through the Tuscan fields! After Monteriggioni we are off to south, to Buonconvento. It is located where the rivers Arbia and Ombrone converge, about 25 km from Siena and 70 km from the largest city in the region – Florence. His name comes from Latin „bonus conventus“, which means “happy place”. And it really is!

Behind the gates of Buonconvento

Entering the gates of the city, you fall into an open-air museum, which takes you somewhere in the distant years of the 14th century. The old city has preserved its authenticity and beauty… His name was mentioned for the first time around 1100 year, and its fortress walls were began in 1371 and were built for 12 years until 1383. You can’t miss them when you take the main road SR2 to the south of Siena. They are located to the right of it, yet at the beginning of the city. There is also a large parking lot, which is perfect for parking and is free of charge. And the locals are not worried to hang out their washing on the city fences.

Buonconvento’s location has been important in its development over the years. It is located on Via Cassia – an important ancient Roman road, and perhaps because of this it becomes a key trading point. At first it had only two gates, Porta Senese in the northern part and Porta Romana in southern. The northern gate is entirely preserved and still on the same place! It welcomes tourists who have decided to experience the atmosphere of the small village. Unfortunately, the southern gate was destroyed by the Germans in 1944.

Via Soccini is the main street dividing the old part in two. Today it is the main attraction for the tourists… with many shops, flowers and cafes. You can look at the preserved buildings, and on some of them you will also see the flags of the various neighborhoods, something very typical for this part of Italy. During my visit, I didn’t even suspect that today I will write this blog and I will need more pictures… that’s why the photos from here are only a few… 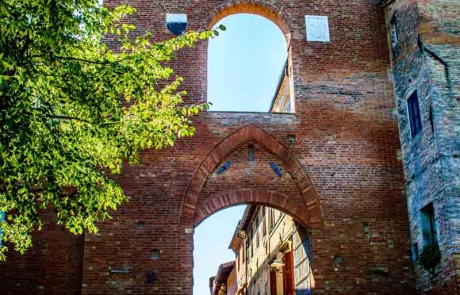 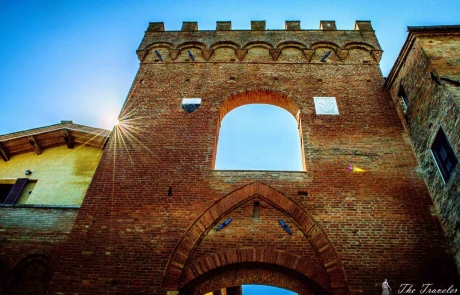 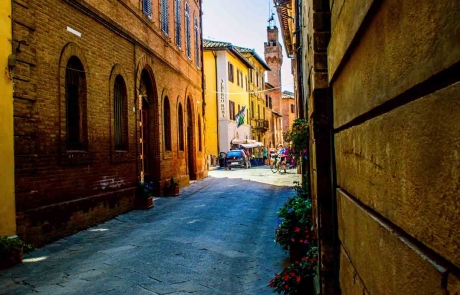 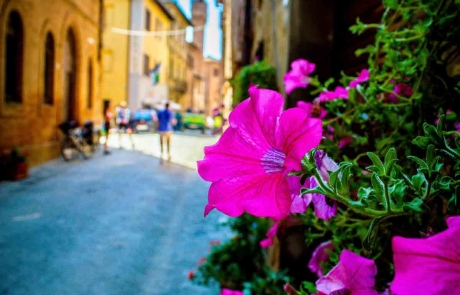 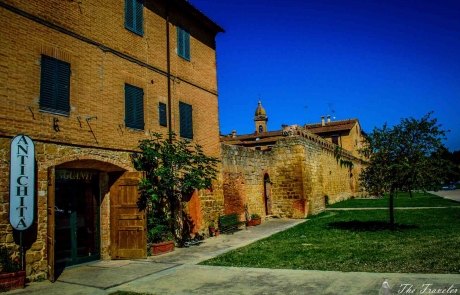 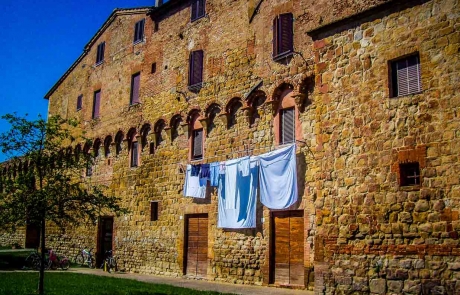 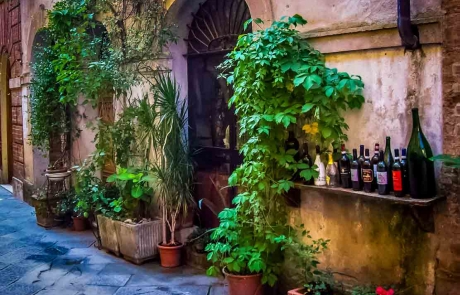 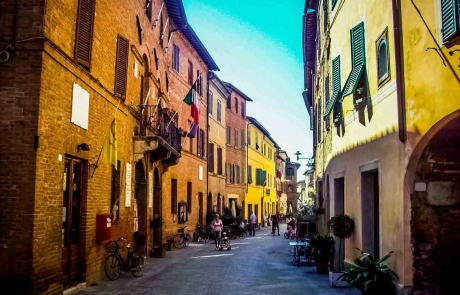 Let’s jump to the Abbey of Monte Oliveto Maggiore

A bonus of the walk to Buonconvento is the Abbey of Monte Oliveto Maggiore. From the gates of the city you have to take the SP451 and after about 9 km through the Tuscan fields and after a slight climb, you will reach the Abbey’s parking lot. The Parking is paid and with a barrier, the hourly rate is 1 euro.

The monastery was founded in 1313 by Giovanni Tolomei – a Siene nobleman. Then it accepted the name Bernardo and together with his followers retired into the monastery and founded Olivetans’order, adhering to the rules of the Benedictines. During the years of the plague, the monks from the Order circled all the towns around Siena and helped the sick and the dying for months. In 1348, Bernardo died, but the rest of the monks continued his deed. Monte Oliveto Maggiore has become one of the most powerful Italian monasteries.

The Abbey’s complex is enormous and the tours go to the more interesting places. Today, the most famous landmark are the frescoes of St. Benedict’s life (again, there are no photos of them because of the reason mentioned above in the text). Except them you can see the monastery’s library and monks’ dining-room. You will also be surprised by the exceptionally well kept gardens and buildings. Pope Pius II himself was amazed by the magnificent gardens and the great fusion of the Tuscan nature and reddish-brown brick buildings. 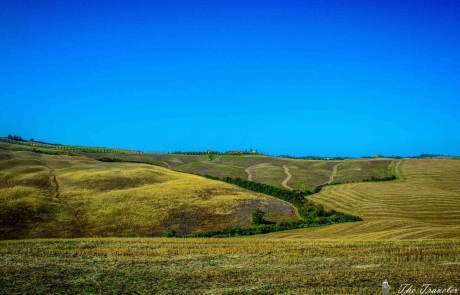 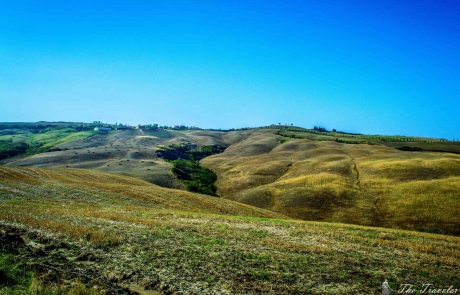 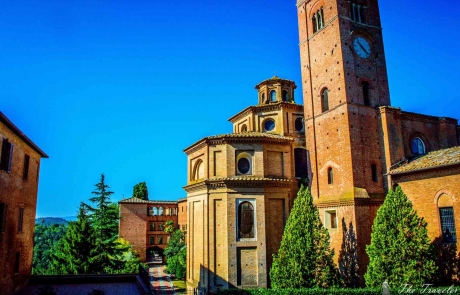 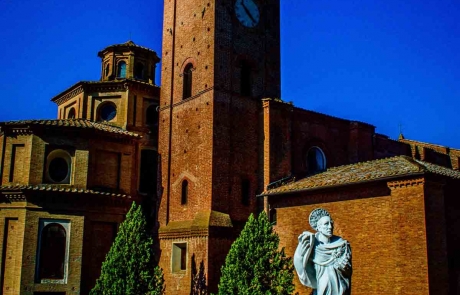 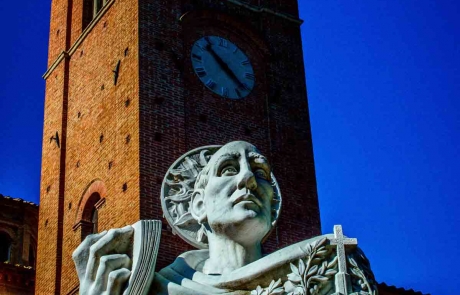 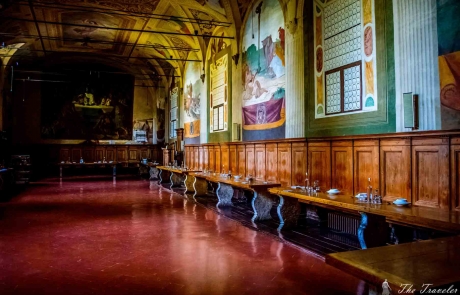 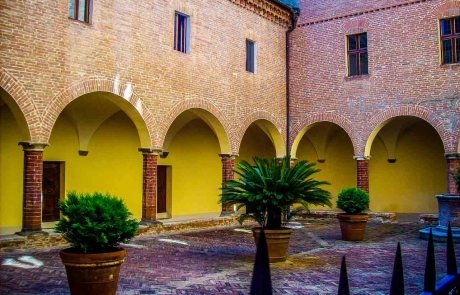 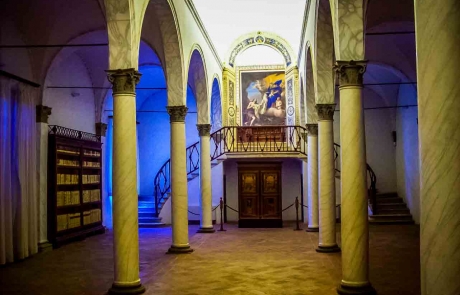