A quick tour around Zagreb – PART 2 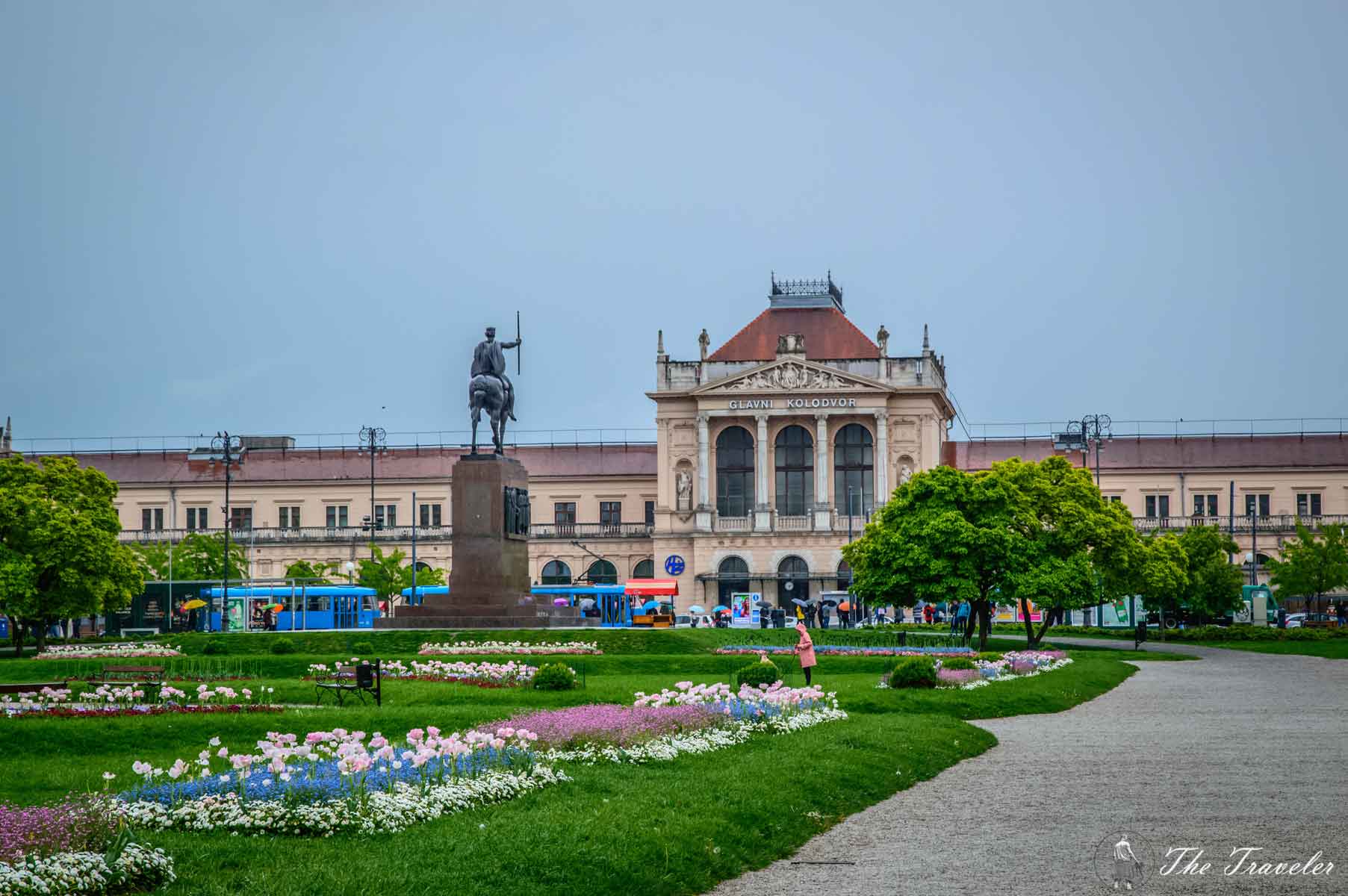 Here we are again in Zagreb! The city isn’t very big, but it is full of things to do and a variety of places. It has fascinating architecture and beautiful nature. This time we stayed overnight and had one afternoon available to explore new places and wander around well-known favorite corners. Here are some new ideas for a quick tour around Zagreb!

We were staying near the botanical garden, but the bad weather prevented us from visiting it and this time… So we decided to start the walk from a key location for the city – the railway station! The classic building was built in 1892 under the supervision of Hungarian architects and sculptures. The facade is especially magnificent, and the importance of the station is preserved to this day and it is a convenient connection to many cities in Western Europe. 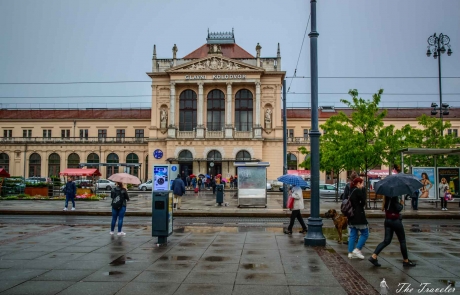 Right opposite the entrance to the station is the statue of the first king of Croatia riding his horse! The green square around it also bears the name of King Tomislav. Beautiful alleys and beautiful flowers fill the entire space between the monument and the huge yellow building, which is the Art gallery of Zagreb.

Also known as “the Pavilion”, this structure was originally built in Budapest on the occasion of the Hungarian Millennium. Croatian artists are pushing for an art pavilion to showcase their work. The metal structure was designed by Hungarian architects, and after the festivities it was moved to Zagreb and completed by famous Austrian designers of theater buildings. 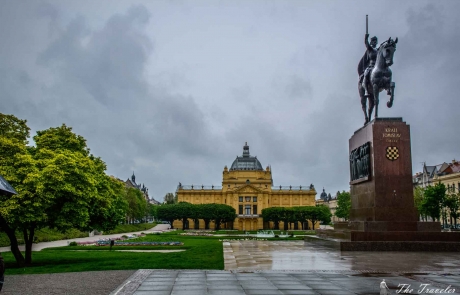 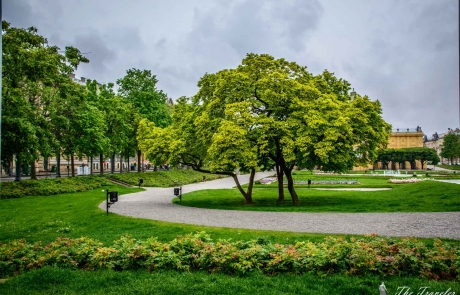 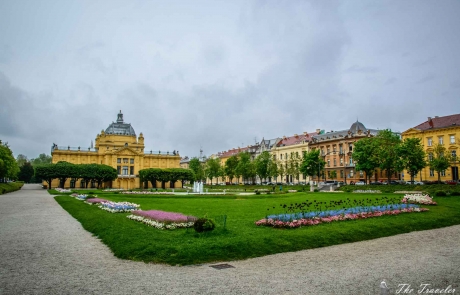 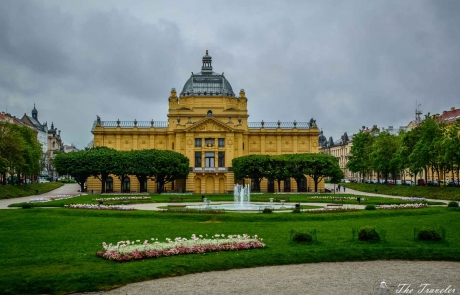 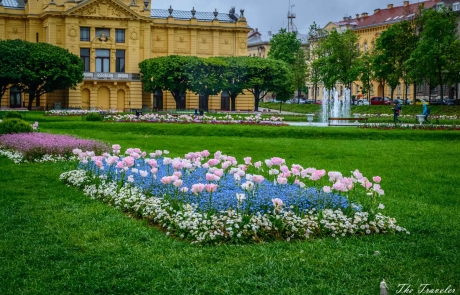 The Green Horseshoe or U-shaped green space in the center of Zagreb continues with a very popular local park – Zrinjevac. Unique tranquility emanates from its alleys, which are like an insulator for city noise. The most recognizable symbol of the park is the Music Pavilion. It was originally planned to have a monument in its place, but a local merchant gave it to the city and in a short time it became a favorite location for concerts and events, which has preserved to this day.

Various busts of important Croatian personalities are scattered in the alleys of the park, there are several fountains and it is often decorated thematically for the respective period. As you can guess from the photos, our visit coincided with Easter.

Don’t miss the old meteorological column at the end of the park. This valuable decoration is one of the oldest meteorological stations in Zagreb. It was originally planned for the central square of Josip Jelacic, but it was decided to build and place it right here in 1884. To this day, it easily measures temperature, pressure and humidity. 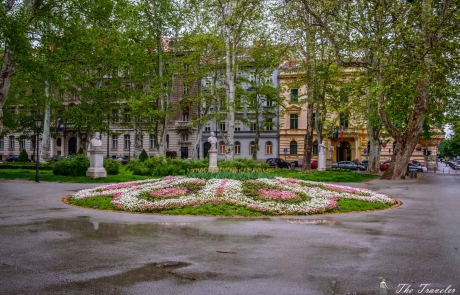 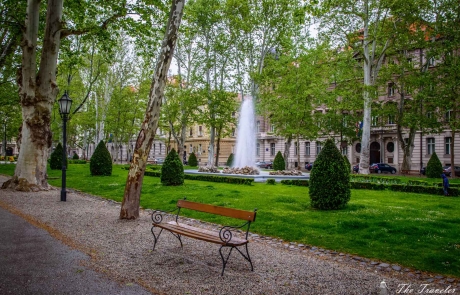 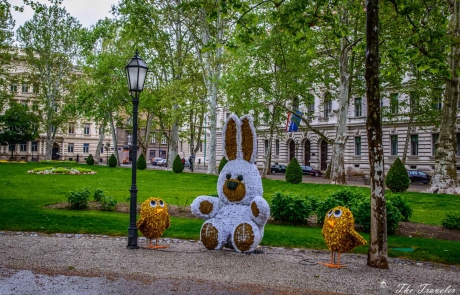 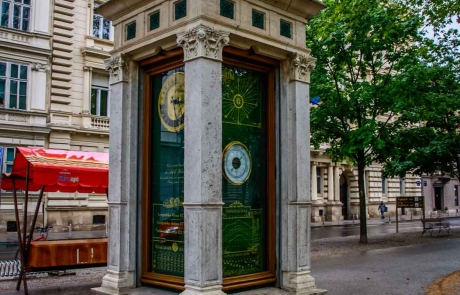 Color shades in the old town

Despite the light rain, we decided to continue the walk through the old part of Zagreb to pass again through well-known places. Almost every green space is full of various flowers that create a wonderful spring mood. The square in front of the cathedral was especially colorful… I can’t forget to shoot she again… 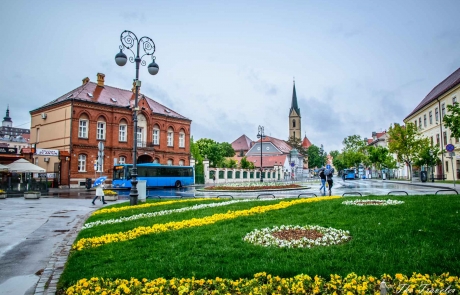 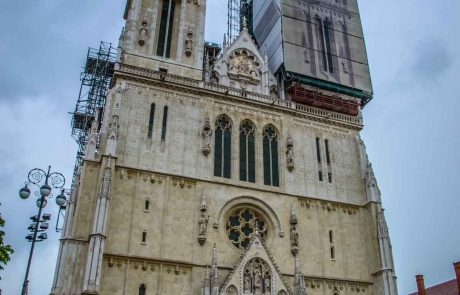 During the previous two visits we were not lucky enough to find the gates of the most recognizable church in Zagreb open, but this time we were lucky! We didn’t wait for a second invitation to sneak in and see St. Mark’s inside. Clean columns, gothic atmosphere, gilded ceilings and many murals fill the space. The interior is no less impressive and impressive than the exterior of the temple… 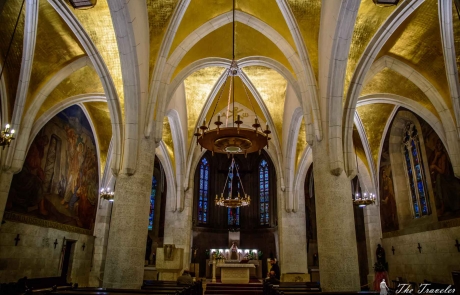 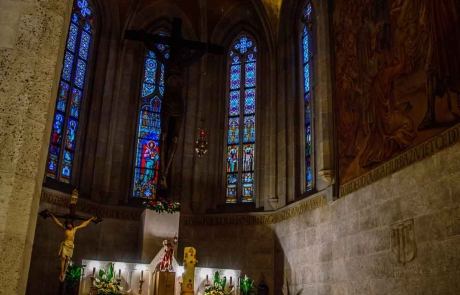 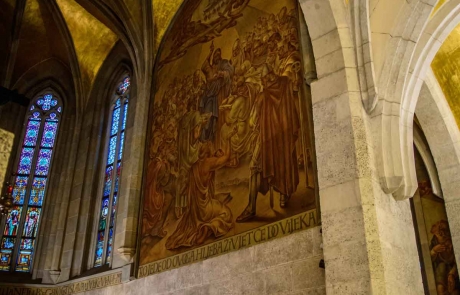 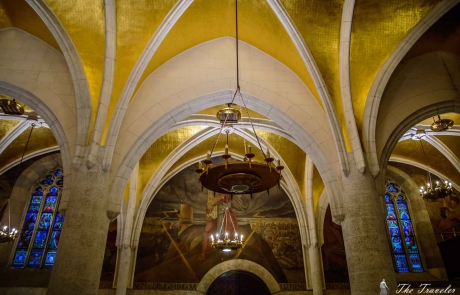 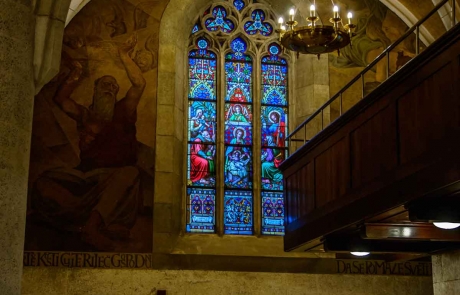 This is one of the newest tourist attractions in Zagreb! This tunnel was built during the Second World War and is part of a mysterious tunnel network throughout the city… Its main function was for a bomb shelter, and today it is the only tunnel open to visitors. Used for conducting on various events. During our visit there was an exhibition of beautiful urban photographs.

The tunnel can easily be used as a shortcut to cross the old town, because there is no fee for visiting it. We entered from the entrance to Mesnička Street and came out all the way to Radićeva Street. About 350 meters, that’s its entire length. 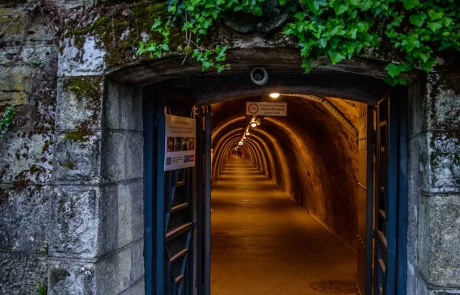 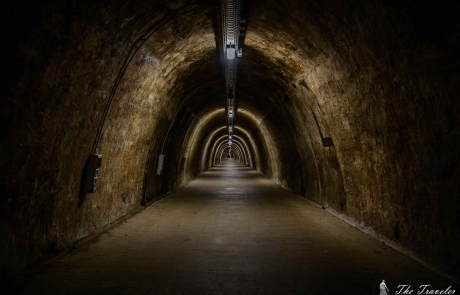 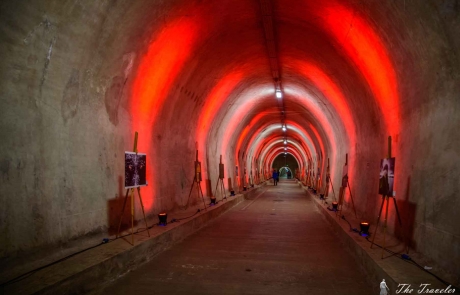 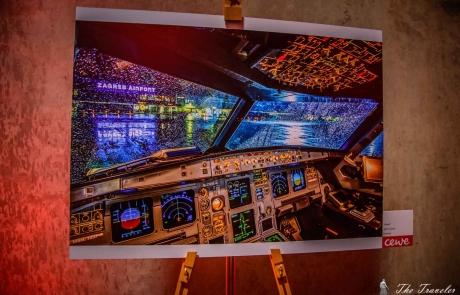 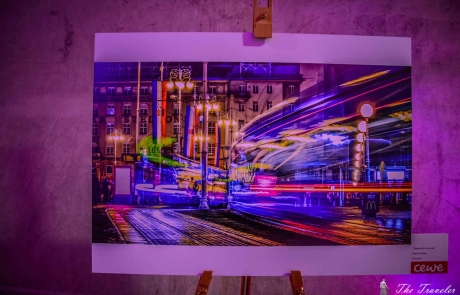 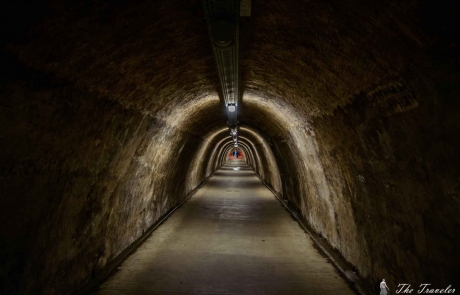 Leaving the tunnel we are greeted by the ongoing spring rain and immediately head to one of our favorite places in this part of town – Tkalčića Street. The lights from the many bars are reflected in the wet pavers to create strange color shades… 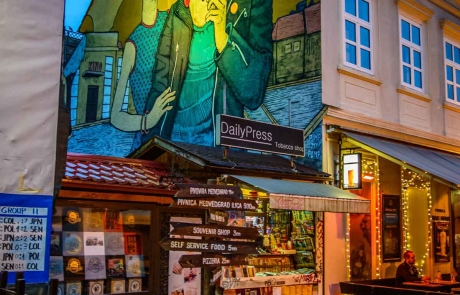 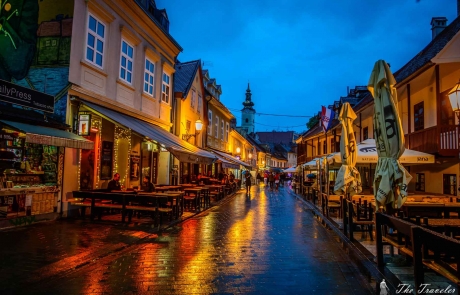 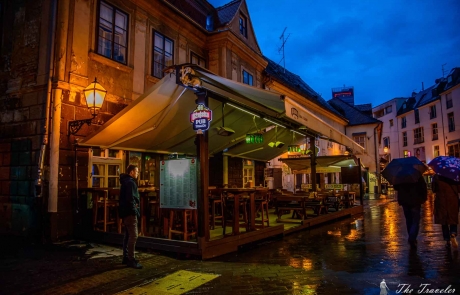 For the first time we have the opportunity to have dinner in Zagreb and I was extremely careful in choosing the place! That’s how we got to a traditional Croatian pub, where meat specialties are revered – Ožujsko Pub Tkalča. The place is big, and we settled in the underground part, where the atmosphere is quite cozy. We chose one of their most popular offers – a plate of meat for two. And with him we fed four people! The prices are just perfect, it cost 150 HRK or around 20 euro! Given the place where we are, there was no way not to garnish with draft Ožujsko beer…

💡 Currently the prices are a bit higher, the current ones can be found on the Facebook page of the restaurant – Ožujsko Pub Tkalča. 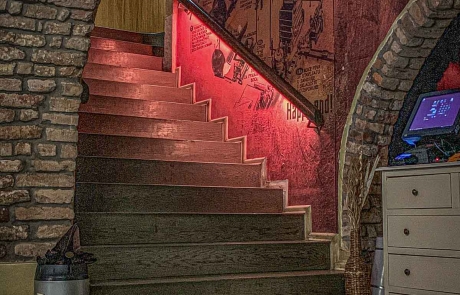 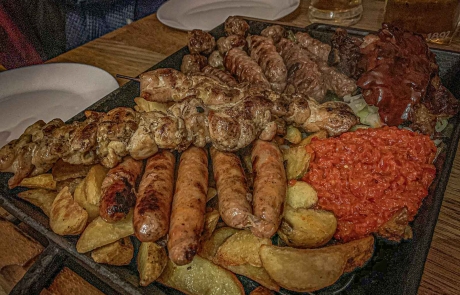 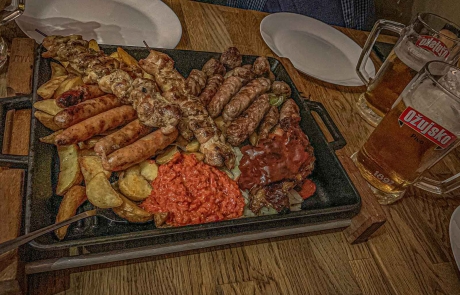 A quick tour around Zagreb